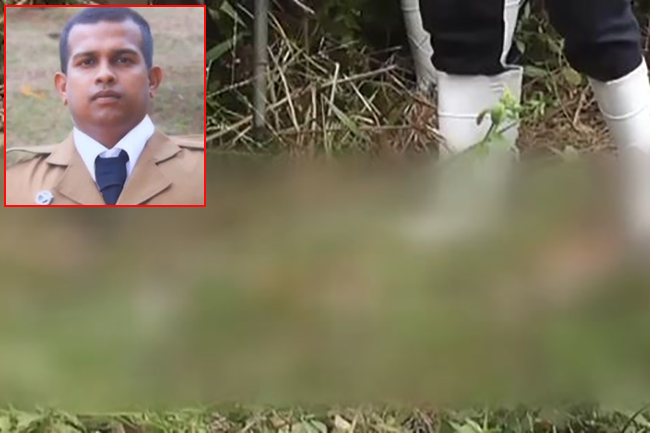 Two suspects have been placed under arrest over the alleged murder of police constable who was reported missing from Kadawatha area since Monday (17).

His body was recovered this morning from Werahera area in Pannala last morning (21) in a decayed condition. Acting Kuliyapitiya Magistrate conducted the magistrate’s inquest on the body.

According to reports, this constable had been involved in an extramarital affair with a woman from Kadawatha, whose husband is serving a prison sentence over drug offences.

Investigations uncovered that the 37-year-old who was serving as a police constable driver attached to Kadawatha Police was kidnapped by the eldest son of the woman in question and one of her nephews, early on Monday morning near a lodge located in Kiribathgoda and later taken to a house in Weralugama, which belongs to her youngest son.

Based on the information obtained from the youngest son during interrogations, on the 18th of February, three police teams were deployed to Kankanimulla woods in Kuliyapitiya in search of the missing cop. During the search operation, several bloodstains were discovered.

The body was found from woods in Bulugahawatte, Yakwila in Pannala this morning, 10km away from the house the constable was taken to by the kidnappers.

As the body was in a decayed condition, the police suspect the constable was murdered at least a few days ago.

The two arrestees include the woman’s nephew and another man who had aided and abetted to hide the body of the murdered police officer.

They are to be produced before Kuliyapitiya Magistrate’s Court.