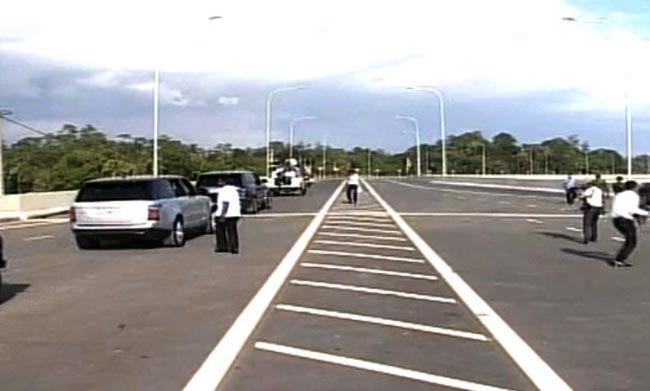 The Matara-Hambantota section of the Southern Expressway was vested with the public a short while ago.

With the opening of this new section, the total length of the Southern Expressway becomes 222 kilometers and the longest expressway in the country.

This also enables direct travel from Colombo to Hambantota on the expressway. This will also facilitate travel to Kataragama from Colombo within 3 and a half hours.  The Southern Expressway links the Mattala Airport and Hambantota Harbour to the Commercial Capital, Colombo.

The construction of this new section has cost the government Rs 169 billion, according to President’s Media Division.

The existing Matara-Godagama entry point on the Expressway will no longer function and a new entry point will be added at Palatuwana.

After opening the road near Godagama, Palatuwa interchange, the President and Prime Minister traveled on the Southern Expressway from Palatuwa to Barawakumbuka.

The President and the Prime Minister were warmly greeted by the general public as they passed interchanges.

The Maha Sangha including the Chief Incumbent of the Temple Ven. Gatamanne Gunananda Thera invoked blessings on the President and the Prime Minister.