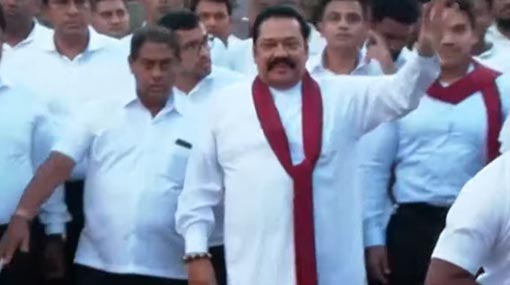 Prime Minister Mahinda Rajapaksa stated that the government will start again the mega-development projects abandoned by the previous government.

He made these remarks addressing the public rally held near the Barawakumbuka interchange at the opening of the Matara-Hambantota extension added to the Southern Expressway today (23).

The Premier said that the national security will be ensured in the country in a similar manner as the government constructs the expressways.

He also said that a Trade and Finance Centre will be built centering the Colombo Port and Katunayake International Airport. Steps have been taken to build an International Technical and Services Centre focusing on the Hambantota Port and Mattala Airport, he added.

Prime Minister Rajapaksa further said that the government will take action to create nine economic corridors that will include the Port of Trincomalee and the port at Kankesanturai.

He further said that all these initiatives are mentioned in the ‘Rata Hadana Saubhagyaye Dekma’, the policy manifesto of the President Gotabaya Rajapaksa.