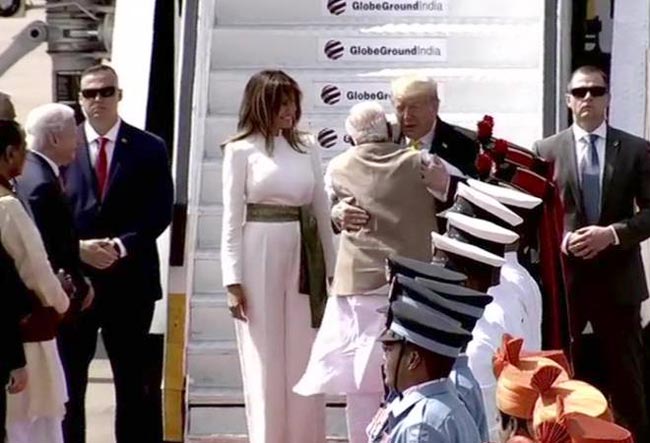 US President Donald Trump landed at Ahmedabad to a red-carpet welcome and a warm hug from Prime Minister Narendra Modi on Monday before setting off on a roadshow, first to the Mahatma Gandhi’s ashram on the Sabarmati riverfront and later to Motera stadium.

Trump, who has been excited about the roadshow and the huge reception at the 1.1 lakh-seat cricket stadium, is accompanied by first lady Melania Trump, daughter Ivanka and son-in-law Jared Kushner.

“Your visit is definitely going to further strengthen the friendship between our nations,” Prime Minister Narendra Modi tweeted ahead of Trump’s arrival.

Tens of thousands of people, many of them wearing white hats saying “Namaste Trump” or cardboard masks of Trump, have lined up along the route to the giant stadium to welcome the US President.

The two leaders are now headed to Sabarmati Ashram, located on the banks of the Sabarmati river and the place and where Mahatma Gandhi lived between 1917 and 1930. The delegation will then go to Motera stadium for the “Namaste Trump” event, on the lines of the grand welcome accorded to PM Modi in the US with the “Howdy Modi” event.

As his motorcade makes its way along a 22-km route, it will pass 28 stages featuring artistes from as many states and exhibits depicting different aspects of Mahatma Gandhi’s life and struggle for the country’s independence.

The arrangements along the route are being billed as the “India Road Show”, with officials saying this exhibition of the country’s diverse culture and heritage for Trump has few parallels in India or elsewhere.

After addressing the rally along with Modi, Trump and his delegation will fly to Agra so that he and First Lady Melania Trump can spend some time at the Taj Mahal before sunset. The US delegation will then fly to Delhi, where Trump and Modi will hold wide-ranging talks on Tuesday.

Trump’s two-day visit is expected to scale up bilateral ties between the two countries, though a big announcement of a trade deal is not expected.

During the talks, Modi and Trump are expected to focus on a wide range of bilateral and regional issues including trade and investment, defence and security, counter-terrorism, energy security, religious freedom, proposed peace deal with the Taliban in Afghanistan and the situation in the Indo-Pacific, according to officials.

Before leaving the White House, Trump told reporters on Sunday that he felt the two-day trip was not long enough, although it will be very exciting.

“I’m going to be there one night. That’s not too much. But it’s going to be very exciting,” he said.

“I look forward to being with the people of India. We’re going to have many millions and millions of people,” Trump added.

With the campaign for the November presidential election in full swing, the US President has a tight schedule.

A day after his return, Trump is to attend a campaign rally in South Carolina on Thursday before the state’s primary election on Saturday.