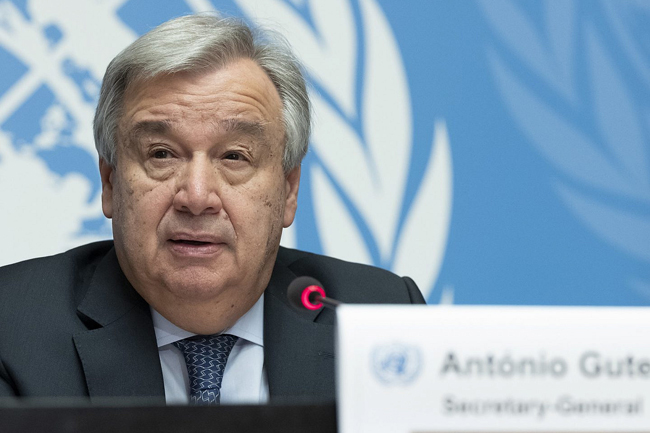 UN chief Antonio Guterres issued on Monday a “call to action” to help renew and revive human rights across the globe, stressing that he was speaking at a time when “human rights are under assault.”

At the start of the latest Human Rights Council session in Geneva, Guterres unveiled a seven-point plan to countries, businesses and all people, amid widespread concerns about climate change and conflicts.

Under the plan, human rights are to be linked to issues like sustainable development, crisis prevention, gender equality, the development of the digital age and freedom of expression and civil society.

“I have come to the Human Rights Council – the fulcrum for international dialogue and cooperation to advance all human rights – to launch a Call to Action”, Guterres said, and added: “Success must be measured by the yardstick of meaningful change in people’s lives. As a United Nations family, a culture of human rights must permeate all we do”.

“It would be a mistake to diminish economic, social and cultural rights”, he added. The comments were seen as a reference to China’s government, which has made economic and social development a key pillar of its approach to human rights.

He was, however, asked to be more direct in his statements by Kenneth Roth, the executive director of Human Rights Watch, who added that by condemning abusers, Guterres “can stand tall against governments committing serious rights violations – whether it’s the atrocities committed against Myanmar’s Rohingyas, indiscriminate Russian-Syrian bombing of civilians in Idlib, or the forced separation of children from their parents at the US border”.