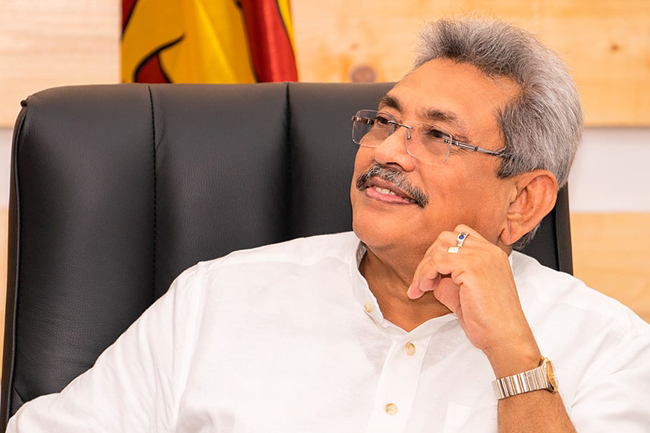 Today (February 25) marks the completion of first 100 days of after assumption of office by President Gotabaya Rajapaksa.

The President’s Media Division (PMD) said that many implementations concerning various sectors including education, public sector and national economy were put into action in keeping with ‘Vistas of Prosperity and Splendour’ manifesto during this period of time.

The PMD has publishing a summary of the decisions and actions taken after President Rajapaksa took office as the new Head of the State last November, stated that the President has taken steps to upgrade 1,000 schools to the level of national schools and to establish a Task Force to provide 100,000 employment opportunities to under-skilled youth from low income families among many other implementations.

The statement also stated that with regard to the public sector, measures were taken to bring all State institutes under single data network in order to provide satisfactory service to the public.

A target of USD 10 billion earnings from the tourism sector by 2025, prohibition of the importation of pepper, tamarind, cinnamon, nutmeg, peas, cardamom, ginger, and cloves, imposing a minimum certified price of Rs. 50/- for a kilo of paddy that meet prescribed standards, declaring a minimum certified price of a kilo of paddy with moisture was set at Rs. 45.00, establishment of a Task Force to eliminate poverty and to develop livelihood, increasing the minimum daily wage of estate workers to Rs. 1000.00 are among the steps taken to boost the national economy, the PMD’s release pointed out further.

Education
•Upgrade 1000 schools to the level of National Schools
•Ensure University admission for every student who qualify through A/L examination
•A programme to provide vocational training coupled with proficiency in English language and Information Technology who do not qualify to pursue higher education had been launched
•A programme to empower graduates for employment
•Establish a Task Force to provide 100,000 employment opportunities to under-skilled youth from low income families
•Measures are underway to offer degrees to those follow nursing and teacher training courses
•Steps have been taken to implement the proposals to reform the education sector by establishing a Task Force on education
•Measures are underway to establish a National Defence Academy and offer higher diploma courses in Defence Studies
•Commenced the programme to provide employments to unemployed graduates / diploma holders in order to harness their contribution to the growth of national economy
•Increasing the maximum age limit to 45 years to apply for the Graduates Employment Scheme

Public Sector
•Obtain recommendations from a panel of experts to appoint Heads of State Institutions
•Exhibit the State Emblem at State Institutions instead of the Photograph of the President and the relevant Minister
•Revision of salaries of Heads of State Institutions. Reducing the salary of Telecom Chairman from Rs. 2 million to Rs. 200,000
•Instructions were given to follow the procurement procedures in transparent manner
•Instructed to halt unnecessary expenses on festivals at State Institutions
•Plans to recruit suitable candidates for the public sector covering every district
•Initiate a programme to transform state entities into efficient and profit generating organizations
•Bring all State institutes under single data network in order to provide satisfactory service to the public
•Update 1919 Government Information Center

National Economy
•Target USD 10 billion earnings from the tourism sector by 2025
•Moratorium on loans below Rs. 300 million obtained by SME sector
•Legal provisions to impose a ceiling on importing goods such as kites and lanterns
•Establishment of National Policy and Planning Bureau to accelerate government investments, national development planning, procurement analysis and management
•Establishment of an inter-ministerial task force to revive and strengthen industries and enterprise development
•The suspension of the regulation to obtain license for the transportation of sand, soil and stones , with the aim of controlling costs of building material used in the construction industry
•Introduction of relevant amendments to eliminate the obstacles faced by the traditional small scale entrepreneurs when they purchase materials.
•The State Ministry of Agriculture was shifted from the private building in Rajagiriya, , to’ Govijana Mandiraya’ in Battaramulla from where it was previously housed
•Allow traders to import wheat flour to remove duopoly
•Granting of 100,000 land slots as a 30-year old leasehold property to build houses, business places or for agricultural purposes
•Prohibited the importation of pepper, tamarind, cinnamon, nutmeg, peas, cardamom, ginger, and cloves
•Imposing a minimum certified price of Rs. 50/- for a kilo of paddy that meet prescribed standards
•Minimum certified price of a kilo of paddy with moisture was set at Rs. 45/-
•Steps have been taken to empower small scale millers. Establishment of a Task Force to eliminate poverty and to develop livelihood
•Measures were taken to increase the minimum daily wage of estate workers to Rs. 1000/-

The President has set many examples towards creating state governance which benefit the country and its citizens
•Taking forward the strategies of the new government effectively without blaming the previous government
•Ensuring the independence of state media organizations
•Reducing the staff at the Presidential Secretariat substantially
•Reducing the number of his security contingent by thousands. Using only 3 vehicles for official purposes
•Using his own house as the  Official Residence of the President
•Cabinet shrunk to 16. A pledge was given to the public to reduce the number of Cabinet Ministers in the future government
•Instructed for the removal of politicians’ photographs from name boards of roads, which are developed using public funds, and further advised to display the name boards of roads with the national emblem and the road name
•Ordered the cancellation of the military honors and the escort at the commencement of the Fourth session of the eighth Parliament with the aim of minimizing the financial waste.

Many important decisions have been taken for the benefit of the general public
•Granting of long-term concessionary loans to persons who are buying a house for the first time
•Issuing of Certificate of Conformity (CoC) in a one day
•Granting approval for appropriately completed housing or small scale business construction plans within one day
•The commencement of the 14,000 housing units construction programme
•Development of 100,000 rural roads with the aim of uplifting rural infrastructure
•150,000 new drinking water supply connections for the benefit of rural people
•Reduced the Telecommunication Levy by 25%
•Reduced the VAT from 15% to 8%
•Instructions were given to change the circulars and regulations that obstruct relief operations during disaster times
•Steps have been taken to relocate people, who are living in sanctuaries, to suitable places
•Only eyesight test was made necessary when issuing the light vehicles driving license
•Steps have been taken to modernize and develop the small towns across the country
•Commencement of paying royalty fees for the singers from January 01st, for their songs broadcast or telecast
•Vesting powers with the Special Task Force to carry out raids on underworld gangs and drug dealers
•Inviting potential investors from world’s powerful states including India and China to invest in Sri Lanka while respecting our unique identity
•A gazette notification has been issued for the deployment of Armed Forces for the purpose of maintaining law and order in nine provinces
•Immediate programmes to draw attention of the Police and other relevant groups regarding the cleanliness of the environment
•Implementation of the programme to provide essential food items for underprivileged people for concessionary rates
•Introduction of new special electronic card to purchase food items at concessionary rates
•Granting of 100,000 land slots under a 30-year lease term to persons who are identified as underprivileged and low-income families
•Instructions to take steps to ensure expedition, convenience and efficiency in carrying out the arrival and departure procedures of the passengers at the airport
•Relevant authorities were advised to expedite the surveying of the land units in the country
•Instructions to expedite the construction of the Central and other expressways

1. Priority was given to the Ratnapura expressway
2. Swift solutions for the traffic congestion within Colombo city limits
3. Parallel coastal way to Panadura along the Galle road
4. Measures to uplift the public transportation network
5. Constructions to be pioneered by local engineers