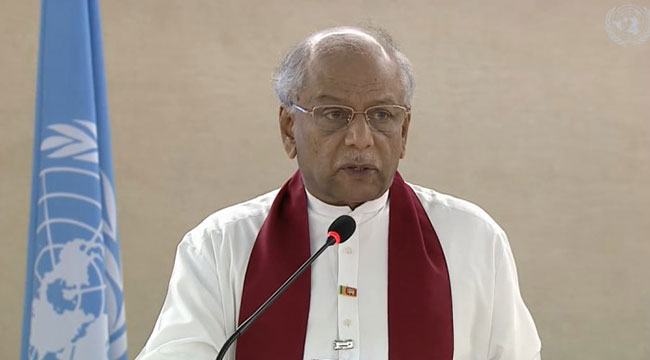 Addressing the 43rd session of the UN Human Rights Council in Geneva, Foreign Minister Dinesh Gunawardena says that Sri Lanka will withdraw the co-sponsorship of Resolution 30/1 of October 2015.

The Minister of Foreign Relations, Skills Development, Employment and Labour Relations is leading the Sri Lanka delegation to the 43rd Session of the Human Rights Council in Geneva.

He addressed the High-Level Segment of the Human Rights Council (HRC) today (26), and formally informed the Council Members of the decision of the Government of Sri Lanka to withdraw its co-sponsorship of Resolution 40/1 of March 2019 on ‘Promoting reconciliation, accountability and human rights in Sri Lanka’, which also incorporates and builds on preceding Resolutions 30/1 of October 2015 and 34/1 of March 2017.

The Minister stated that the commitments of the resolution bound the country to carry out an experiment which was impractical, unconstitutional and undeliverable.

He stated that it remains, to date, a blot on the sovereignty and the dignity of the people of Sri Lanka.

In co-sponsoring resolution 30/1, the previous government violated all democratic principles of governance declared support even before the draft text was presented, said Gunawardena.

He said that, with cabinet approval to deliver the dictates of an international body, there was no reference to parliament on the process of undertaking and repercussions of such co-sponsorship.

The complete speech made by the Foreign Minister at UNHRC:

As this Council is aware, in November 2019, the people of Sri Lanka gave a resounding mandate to President Gotabhaya Rajapaksa, to pursue a policy framework aimed at achieving the “four-fold outcome of a productive citizenry; a contented family, a disciplined, a just society and a prosperous nation”. It is envisaged to achieve sustainable development and peace in the country, firmly anchored in safeguarding “national security without compromising the democratic space available to our people”.

It was over a decade ago, on 18 May 2009, that Sri Lanka defeated LTTE terrorism militarily, bringing to an end three decades of conflict and suffering. The end of the brutal conflict advanced, secured and protected one of the fundamental human rights - the ‘right to life’ for all Sri Lankans- Sinhalese, Tamil, Muslims and others. I would like to state with pride that since May 2009, not a bullet has been fired in the name of separatist terrorism in Sri Lanka.

Sri Lanka never had any illusion that the end of the conflict against the LTTE terrorists, will overnight convert to a lasting peace. Although Sri Lanka was not a case of nation building, like many conflict situations that this Council is dealing with, we were mindful that Sri Lanka needed certain reviews and strengthening of existing structures, as part of a sustainable peace and reconciliation programme.

The government led by the then President Mahinda Rajapaksa, of which the current President Gotabaya Rajapaksa was the Secretary to the Ministry of Defence, initiated a sustainable reconciliation process in Sri Lanka to bring about ‘healing and peace building’, taking due cognizance of the ground realities at that time. This was viewed as an incremental and inclusive process, as it had taken even better-resourced countries several decades to address and achieve.

As at December 2014, at the point the Mahinda Rajapaksa Government, of which I was a member, was concluding its term, we had made considerable progress in;
-       de-mining
-       resettlement
-       return of land used by the security forces
-       reduction of military presence in the former conflict areas,
-       rehabilitation and reintegration of ex- LTTE combatants including child soldiers,
-       rapid infrastructure development
-       restoration of the right to franchise in the former conflict affected areas, and
-       establishment of domestic mechanisms to address issues related to accountability, rule of law and human rights

Notwithstanding these inclusive and locally designed measures, undertaken carrying along the people of Sri Lanka, a group of UNHRC members, failing to appreciate the GoSL’s endeavors in defeating terrorism and bringing about stability, humanitarian relief and lasting peace through a carefully balanced reconciliation process, moved consecutive country-specific resolutions at the UN HRC on Sri Lanka in 2012, 2013 and 2014.

The previous government in January 2015 jettisoned this home-grown reconciliation process which was bearing fruit. In an unprecedented move in the annals of the Human Rights Council, and contrary to Sri Lanka’s stance on country specific resolutions, the government at the time co-sponsored the UNHRC resolution 30/1 on Sri Lanka.

Substantively, the previous government “noted with appreciation”, the much flawed OISL Report, which was used as the basis not only for Resolution 30/1, but also to unjustly vilify the heroic Sri Lankan security forces, possibly the only national security establishment that defeated terrorism in recent times. This was despite there being an abundance of evidence to the contrary, contained in;

- domestic reports such as the LLRC and the ‘Paranagama Commission’
- information presented before the UK House of Lords by Lord Naseby,
-  challenging among other things the vastly exaggerated civilian casualty figures,
- other reports from the UN and international agencies including the ICRC
- as well as exposed diplomatic cables.

Constitutionally, the resolution seeks to cast upon Sri Lanka obligations that cannot be carried out within its constitutional framework and it infringes the sovereignty of people of Sri Lanka and violates the basic structure of the Constitution.  This is another factor that has prompted Sri Lanka to reconsider its position on co-sponsorship.

Procedurally, in co-sponsoring Resolution 30/1, the previous Government violated all democratic principles of governance.

-       it declared support for the resolution even before the draft text was presented
-       it sought no Cabinet approval to bind the country to deliver on the dictates of an international body.
-       there was no reference to the Parliament on the process, undertakings and repercussions of such co-sponsorship.
-       more importantly the Resolution itself included provisions which are undeliverable due to its inherent illegality, being in violation of the constitution, the supreme law of the country.
-       it also overruled the reservations expressed by professional diplomats, academia, media and the general public.
-       the then President Maithripala Sirisena also stated that he was not consulted on the matter at that time.
-       It remains to date a blot on the sovereignty and dignity of Sri Lanka.

The commitments made, bound the country to carry out this experiment, which was impractical, unconstitutional and undeliverable, despite strong opposition and evidence that many of the undertakings couldn’t be carried out, merely to please a few countries.

In terms of reputational damage, it eroded Sri Lankans’ trust in the international system and the credibility of Sri Lanka as a whole in the eyes of the international community. This irresponsible action also damaged long nurtured regional relationships and Non-Aligned as well as South Asian solidarity. The deliberate polarization it sought to cause through trade-offs that resulted in Sri Lanka’s foreign policy being reduced to a ‘zero-sum game’, made my country a ‘pawn’ on the chess board of global politics, and unnecessarily drew Sri Lanka away from its traditional neutrality.

Most seriously, it is seen that the dictated changes in the country pursuant to 30/1, undermined the national interest and compromised national security, including weakening national intelligence operations and related safeguards, which are deemed to have contributed to the lapses that resulted in the Easter Sunday attacks in April 2019, which targeted churches and hotels, resulting in loss of life, including those of foreign nationals, which poses challenges to our government to restore national security.

It is ironic that, in March 2019, the previous government which co-sponsored Resolution 30/1 in October 2015, began the process of dismantling its dictates through the statement, made in this Council by my predecessor, which acknowledged the very real constraints that had been ignored 4 years before at the time of co-sponsoring this resolution. That statement sought to qualify the parameters of co-sponsorship of the Resolution. It questioned;

-       the Resolution 30/1’s characterization of the nature of the conflict and the estimated number of deaths,
-       pushed back on the alleged culpability of the security forces,
-       curtailed the effect of security sector reform demanded
-       asserted that the Sri Lanka Constitution precludes involvement of foreign judges and prosecutors in the judicial mechanism proposed.
-       Notwithstanding this admission, the former Government continued its co-sponsorship, which fully supported the operationalization of Resolution 30/1.

With the election of President Gotabaya Rajapaksa with an overwhelming majority, the people of Sri Lanka have given a clear signal for their wish for a different path forward for the country. As President Rajapaksa stated in his address at the 72nd Commemoration of Independence of Sri Lanka, “We will always defend the right of every Sri Lankan citizen to participate in the political and governance processes through his or her elected representatives”.

According to the wishes of the people of Sri Lanka, while following a non-aligned, neutral foreign policy, our government is committed to examining issues afresh, to forge ahead with its agenda for ‘prosperity through security and development’, and to find home-grown solutions to overcome contemporary challenges in the best interest of all Sri Lankans.

It is in this context that I wish to place on record, Sri Lanka’s decision to withdraw from co-sponsorship of Resolution 40/1 on ‘Promoting reconciliation, accountability and human rights in Sri Lanka’ which also incorporates and builds on preceding Resolutions 30/1 of October 2015 and 34/1 of March 2017.

Notwithstanding withdrawing from co-sponsorship of this Resolution, Sri Lanka remains committed to achieving the goals set by the people of Sri Lanka on accountability and human rights, towards sustainable peace and reconciliation. To this end;

Firstly, the Government of Sri Lanka declares its commitment to achieve sustainable peace through an inclusive, domestically designed and executed reconciliation and accountability process, including through the appropriate adaptation of existing mechanisms, in line with the Government’s policy framework. This would comprise the appointment of a Commission of Inquiry (COI) headed by a Justice of the Supreme Court, to review the reports of previous Sri Lankan COIs which investigated alleged violations of Human Rights and International Humanitarian Law (IHL), to assess the status of implementation of their recommendations and to propose deliverable measures to implement them keeping in line with the new Government’s policy.

Secondly, the Government will also address other outstanding concerns and introduce institutional reforms where necessary, in a manner consistent with Sri Lanka’s commitments, including the 2030 Sustainable Development Agenda (SDGs). We will implement policies rooted in the Government’s commitment to the people by advancing individual and collective rights and protections under the law, ensuring justice and reconciliation and addressing the concerns of vulnerable sections of society. A discussion has already been held between the President and the UN Resident Coordinator where it has been agreed to connect the relevant UN agencies to help the Government of Sri Lanka in the implementation of the SDGs.

Thirdly, Sri Lanka will continue to remain engaged with, and seek as required, the assistance of the UN and its agencies including the regular human rights mandates/bodies and mechanisms in capacity building and technical assistance, in keeping with domestic priorities and policies.

Finally, in conjunction with all members of the UN, Sri Lanka will seek to work towards the closure of the Resolution.

No one has the well-being of the multi-ethnic, multi-lingual, multi-religious and multicultural people of Sri Lanka, closer to their heart, than the Government of Sri Lanka. It is this motivation that guides our commitment and resolve to move towards comprehensive reconciliation and an era of stable peace and prosperity for our people. It is therefore our strong conviction that the aforementioned actions within the framework of Sri Lanka’s domestic priorities and policies, are not only realistic but also deliverable.

We call upon all stakeholders, within and outside this august body, to cooperate with  Sri Lanka, in this endeavor.

May I conclude quoting the words of Lord Buddha,