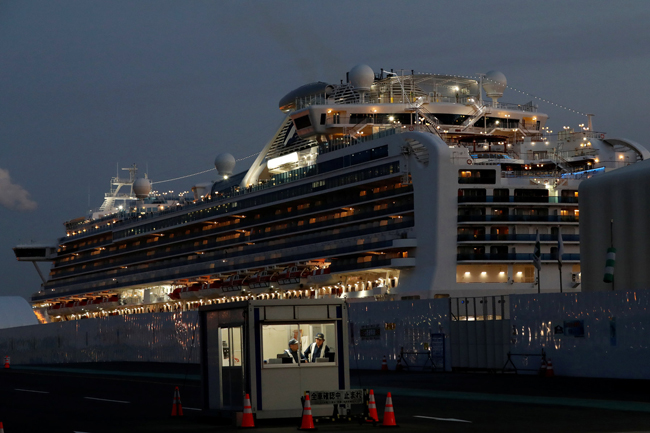 The two Sri Lankans on board ‘Diamond Princess’ the cruise ship have been sent to India after being tested negative for COVID-19, says the Embassy of Sri Lanka in Japan.

They will return to the island after being quarantined for 14 days in India.

‘Diamond Princess’ cruise ship carrying 3,711 passengers and crew members has been held in quarantine at Yokohama Port in Japan since the 3rd of February, after a passenger who had disembarked in Hong Kong was tested positive for the virus.

The cruise liner has so far reported over 700 confirmed COVID-19 cases and 4 deaths.

The five foreigners evacuated by the charter flight include one each from Nepal, South Africa and Peru.

All the evacuees will undergo 14-day quarantine at a medical facility in Army camp at Manesar, Haryana, according to Indian media.

In the meantime, Prime Minister Mahinda Rajapaksa, taking to his official Twitter account, stated that Acting Indian High Commissioner has informed him of the evacuation of Two Sri Lankans on board the ‘Diamond Princess’ cruise ship and their safe arrival in Delhi.

He extended his gratitude to the government of India and Premier Nadendra Modi for facilitating the evacuation.

The Actg. Indian High Com. in #lka informed me the two Sri Lankans on board the #DiamondPrincess who were quarantined were flown out of Tokyo & arrived safely in #Delhi. My heartfelt gratitude to PM @narendramodi, the Gov. of India & @airindiain for facilitating the evacuation.

Air India flight has just landed in Delhi from Tokyo,carrying 119 Indians & 5 nationals from Sri Lanka,Nepal, South Africa&Peru who were quarantined onboard the #DiamondPrincess due to #COVID19. Appreciate the facilitation of Japanese authorities.
Thank you @airindiain once again