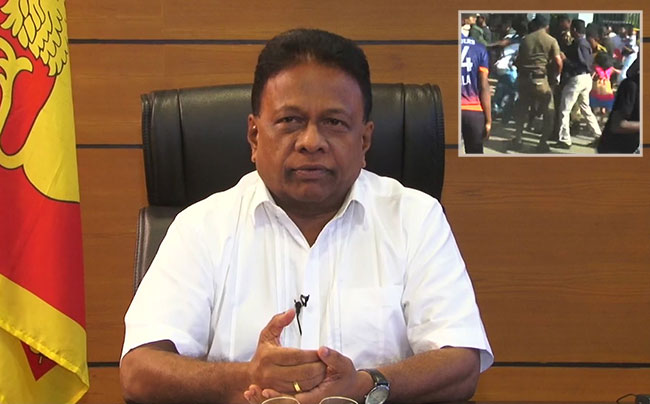 Sports Minister Dullas Alahapperuma has instructed Sri Lanka Cricket (SLC) to investigate the assault on spectators near the entrance to the Sooriyawewa Stadium during the second ODI between Sri Lanka and West Indies yesterday (26).

A large crowd of cricket fans had reportedly been assaulted near the ticket counters located at the entrance to the international cricket stadium in Sooriyawewa during yesterday’s ODI match.

Issuing a statement today, the Ministry of Sports said that no international cricket matches have been held at the Sooriyawewa stadium over the past couple of years and that yesterday’s ODI match between Sri Lanka and West Indies was the first international match held at the venue after 4 years.

During the aforementioned match, a large number of cricket fans who had arrived at the stadium were subjected to an attack near the ticket counters.

The Sports Minister has stated that he does not condone this regrettable situation and that as the subject minister he strongly condemns what had transpired.

He further states that it is regrettable that such an incident had taken place in a country where the people respect the sport and respect the image of the players.

The minister has ordered the Secretary to the Ministry of Sports and the SLC administration to carry out an immediate inquiry on the incident and submit a report to him.

The minister has also apologized to all cricket fans with regard to this regrettable situation, the statement said.