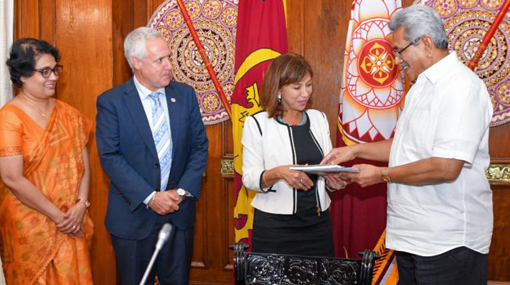 This was noted in a press release regarding a portfolio outlining a vision to end child malnutrition in Sri Lanka, jointly developed by the United Nations (UN), the World Bank and the UNICEF, which was presented to President Gotabaya Rajapaksa yesterday (26).

The event was attended by Government and Development partners including donor agencies.

According to the Demographic Health Survey 2016, the prevalence of stunting, wasting and underweight among children under 5 years of age remained static at 17.3%, 15.1% and 20.5%, respectively (a level of 15.1% is categorized as ‘very high’), says the UNICEF adding that prevalence of wasting in the country, places Sri Lanka among the 10 worst low- and middle-income countries in the world, with worse rates than Nepal, Bangladesh and Afghanistan.

Emphasizing the maternal, newborn and child malnutrition in the country, the UNICEF stated that irreversible damage of malnutrition to a child’s health and development is enormous. “While the problem of wasting increases the risk of stunted growth in a child, which is usually irreversible even if experienced just once; Stunting leads to impaired growth and development including of the brain. This damage is lifelong and not only hampers a child’s performance in school, but also limits their cognitive abilities, health and work productivity in later life, undermining a country’ sustainable national development.”

Handing over the portfolio, the forum has highlighted that, Sri Lanka has many policies, programs and interventions in place, but these have proven inadequate to tackle the magnitude of the malnutrition issue. Combined with the low, financing for nutrition-specific intervention, indicating rates lower than other countries in the region.

Last year, President Gotabaya Rajapaksa committed to tacking child malnutrition within the next five years through different interventions as part of his presidential election manifesto.

Key actions outlined in the porftolio include:

•Strengthening co-ordination, while increasing the coverage and improving the quality of our nutrition-relevant interventions across the country.

•A multi-sectoral coordination mechanism under the Presidential Secretariat will convene the technical and financial resources of all crucial sectors including Finance and Planning, Health, Education, Women, Child Affairs and Social Security, Agriculture and Water, given the complexity of the nutrition challenge and inequities prevalent across diverse geographic regions.

•Implementation of a Multi Sectoral Action Plan for Nutrition (2018 – 2025) requires the funding support from bilateral and multilateral donors, which will help accelerate efforts to address malnutrition.