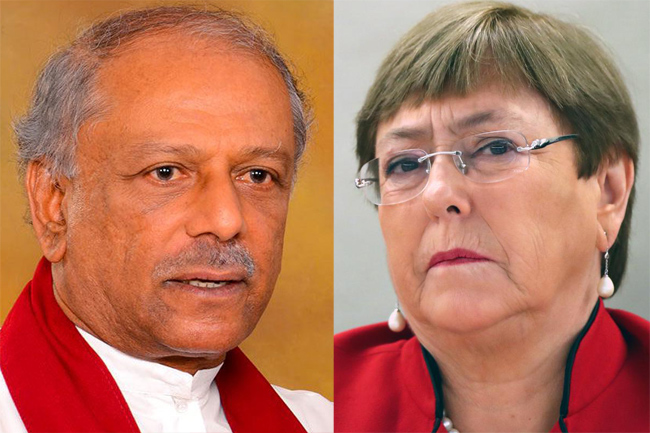 Minister Dinesh Gunawardena reiterated the Sri Lankan Government’s decision to withdraw from co-sponsorship of resolution 40/1 and the basis for doing so.

He recalled that, one year ago, his predecessor the former Minister of Foreign Affairs had also pointed out a number of areas in the resolution that were undeliverable.

Notwithstanding the withdrawal from co-sponsorship, he emphasized the Government’s commitment to achieving accountability and human rights within the framework of the Constitution towards sustainable peace and reconciliation, through the appointment of a domestic Commission of Inquiry, by implementing policies rooted in the Government’s commitments to operationalize the Sustainable Development Goals (SDGs), and by continuing to work with the assistance of the UN and its agencies.

It was noted that the existing reconciliation mechanisms established by Acts of Parliament such as the Office on Missing Persons and the Office for Reparations will be continued, with appropriate adaptation in line with the Government policy framework.

The Sri Lanka delegation shared its perspective on a number of areas, including the need for closure, adequate funding to reconciliation measures, shortcomings in the former Counter Terrorism Bill and the Government’s intention to undertake a review of the Prevention of Terrorism Act (PTA) with a view to proposing necessary amendments to its provisions.

The High Commissioner also engaged the Minister and delegation on the challenges faced in dealing with the interface between freedom of expression and the prevalence of hate speech and abuse of social media, technology and human rights and environment and human rights.

State Minister of Public Administration and Home Affairs Mahinda Samarasinghe, Foreign Secretary Ravinatha Aryasinha, Additional Secretary to the President Admiral (Retd) Jayanath Colombage, Senior Deputy Solicitor General Nerin Pulle, and Acting Permanent Representative to the UN in Geneva Dayani Mendis were associated with Minister Gunawardena at the meeting. Director General of the UN and Human Rights Division of the Ministry of Foreign Relations M.R.K. Lenagala, Senior State Counsel Kanishka Balapatabendi, Brigadier E.S. Jayasinghe from the Ministry of Defence and Coordinating Secretary to the Minister of Foreign Relations Subash Sri Wijethunga were also part of the Sri Lanka delegation to the 43rd session of the HRC.