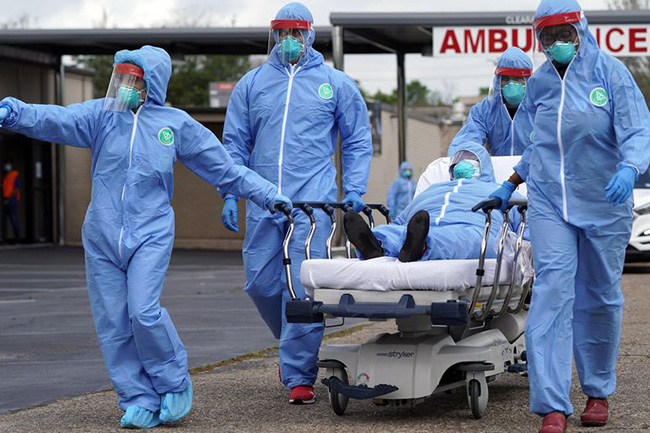 The U.S. surged past China and Italy to become the planet’s most infected nation Thursday, a stark milestone in the coronavirus era - and a reminder of its deadly, culture-changing effects on American life.

Part of the reason for the nation’s top-ranking is cause and effect: The U.S. has drastically ramped up its testing protocols in order to identify infected people and those who may be carriers of the virus. As testing has increased, so has the number of confirmed cases.

Everyday people have been taking the brunt of the virus, both in terms of its deadliness and its effect on their ability to provide for their families. Many are reading headlines that would have been unthinkable just a month ago.

Dann Dykas, 37, of Portland, Oregon, was laid off from his job helping design and set up displays for trade shows.

“Everything is so surreal,” he said. “I can’t even get an interview for another job, and we now have to worry more about being careful and taking care of ourselves.”

But the statistical ranking as #1 has important implications for a nation that has already been rattled to its core. The number of Americans filing initial applications for unemployment benefits jumped nearly twelvefold to a record 3.3 million, the Labor Department said, offering the most vivid evidence yet of the coronavirus’s widespread damage to the economy.

The pandemic has set off the most abrupt near-shutdown of the economy in history. Many restaurants, shops, movie theaters, sports arenas and other gathering spots were compelled to close their doors or scale back service – and lay off staff.

The coronavirus is also taking a growing toll on the U.S. military, and commanders and senior officials are bracing for worse. From nuclear missile fields at home to war zones abroad, from flight lines to ships at sea, the Pentagon is striving to shield vital missions even as it faces urgent calls for help on the civilian front.

One hundred people in New York state died Wednesday from the coronavirus, the state’s single deadliest day since the virus at the center of a global pandemic first hit, Gov. Andrew Cuomo said. The surge of deaths pushed New York’s total count to 385 since the beginning of March, when the state found its first confirmed case of COVID-19.

New York remains the epicenter of the U.S. coronavirus outbreak with 37,258 confirmed cases – almost half of the national total as of Thursday afternoon. Cuomo said the outbreak’s peak in the state is still at least two weeks away, and the state was battling to make room in hospitals and obtain ventilators.

The recent death toll includes a health care worker at one of the New York City hospitals under siege by the coronavirus has died, according to coworkers and his sister. Kious Kelly, an assistant nurse manager at the Mount Sinai West hospital in Manhattan, died Tuesday from the virus after he got sick two weeks ago, multiple friends said in social media posts.

Kelly’s sister, Marya Sherron, told the New York Post that her brother had informed her of his illness about 10 days earlier.

“He told me he had the coronavirus,” she said. “He was in ICU but he thought he was OK. He didn’t think it was serious as it was.”