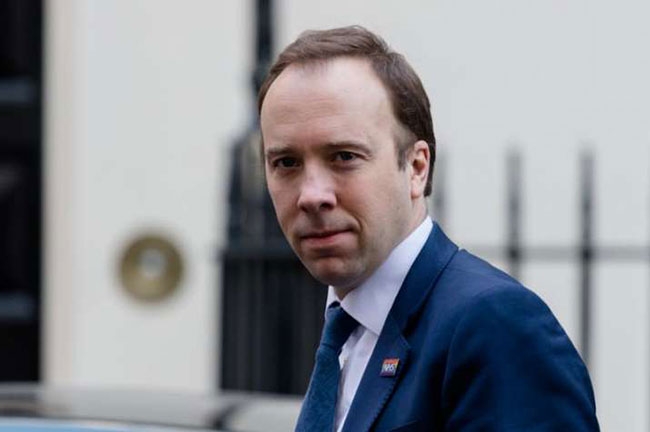 In a video posted on his Twitter, he confirmed he has Covid-19.

It comes hours after British Prime Minister Boris Johnson announced he too had tested positive for the virus.

In a video on Twitter, the Prime Minister said he has “mild symptoms” and is self-isolating but says he will “continue to lead the government’s response”.

Mr Johnson sat near to Matt Hancock at Prime Minister’s Questions in the House of Commons on Wednesday.

The Prime Minister’s spokesman initially said he was “not aware of any further testing” when asked if the Health Secretary - and other Cabinet members - had been tested.

In a video posted on Twitter, Mr Hancock said he was experiencing “mild symptoms” and said he would be self-isolating until next Thursday.

The Health Secretary said: “Fortunately for me the symptoms so far have been very mild so I’ve been able to carry on with the work driving forward the UK response.”

He also said a “massive thank you to everybody in the NHS, working in social care and right across the board on the response”.

Mr Hancock added: “I’ll be continuing to do everything I can to get our carers the support that they need. And I’ll be doing that from here but with no less gusto.

“And then from next Thursday, once I’m out of self-isolation and I hope with no more symptoms, then I’ll be able to get back stuck in and into the office where necessary.

“But the truth is that all of us can learn that working from home can be really, really effective.”

Support for Mr Hancock has poured in from across the political spectrum, with many wishing him a full recovery.

Shadow health secretary Jonathan Ashworth tweeted: “Take care and get well soon Matt. Look after yourself and best wishes to you and your loved ones.”

Former Health Secretary Jeremy Hunt tweeted: “Thinking of you and your family”.

He added: “I am one of the few who know how tough your job is (but no pandemic!) and you have shown MAGNIFICENT commitment to the NHS and its staff. Get well soon!”

Nadine Dorries was the first Westminster representative to test positive for coronavirus.

The Mid-Bedfordshire MP tweeted get well wishes to Mr Hancock on Friday, writing: “And now my immediate boss! Get better soon, Matt.”

Ms Dorries spent time self-isolating after the positive result, referring to the diagnosis as a “game-changer”.

Kate Osborne became the second MP to be diagnosed with Covid-19, as a peer became the first in the House of Lords to self-isolate.

Ms Osborne’s diagnosis announcement was followed by news that Baroness Northover - a Liberal Democrat peer - was self-isolating after developing symptoms.