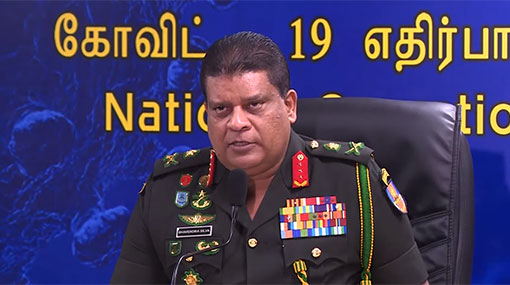 Passengers of Malaysian flight urged to report without further delay

Army Commander Lt Gen. Shavendra Silva said that a total of 96 quarantined returnees, 86 from Damminna and 10 from Diyatalawa Quarantine Centres (QCs) after the two-week long quarantine process, left for their homes this morning after receipt of Quarantine Certificates.

With this, a total of 2,118 quarantined individuals have so far left those QCs, manned by tri services, he said.

He stated this during the routine media interaction at the National Operation Centre for Prevention of COVID-19 Outbreak (NOCPCO) at Rajagiriya today (01).

“Likewise, a total of 42 individuals, suspected to have been in contact with COVID-19 positive victims, reported from Kalubowila, Anadiambalama, Dankotuwa, Periyamulla, Kochchikade and Porutota were referred to Panichchankerni QC under the Punani QC by the Army late Tuesday (31) evening, and they had reached the QC by this morning (1). Similarly, a 24-member medical team, including doctors and nurses who attended on the dead victim in Negombo Hospital has been kept in quarantine at a hotel in Waikkal for 14 days.”

“As of now, 1794 persons, including 8 foreign nationals are still in quarantine in 33 island-wide QCs. Another batch of 195 quarantined individuals is also ready to proceed home by tomorrow (2) morning,” the Head of the NOCPCO further revealed.

“People became disturbed yesterday with detection of 21 positive cases. The reason for that was the detection of a positive case, who had arrived from overseas but had apparently got in contact with people in his village.” On the directions of the President and the Prime Minister, a total of 68 suspicious villagers were thus mobilized to the Zahira College in Puttalam for observation and being kept in quarantine for 14 days, he said.

The Army Chief said a special medical examination at their request was also conducted on those, and it confirmed that 10 of them (7 males and 3 females) were positive COVID-19 cases. Accordingly, measures were immediately taken to admit them to the IDH at Mulleriyawa under the Army supervision this morning (1), and this increased the day’s toll to 10, Lieutenant General Silva pointed out.

Focusing on a special matter of significance, he added that the positive case, detected from Puttalam area had arrived in Sri Lanka on 17 March 2020 on board the Flight OD 185 of Malaysian Airlines, together with 36 more passengers, bound for Sri Lanka. Among them were also 4 foreigners.

He said that out of all 37 passengers aboard that flight, only one from Puttalam area was found positive and confirmed infected. The remainder, all 36 passengers have hitherto failed to register with the Police, nor have they reported so far to any of the Public Health Inspectors or Health officials.

“We very earnestly call upon all those passengers to immediately join the Quarantine Process and support us in our efforts,” the Army Chief appealed.

“In the past few days, Bandaragama, Atalugama village, Akurana and Kadayankulum in Puttalam were completely isolated and QCs were subsequently set up, and as a result, 3 more positive cases from Akurana, 10 positive ones from Puttalm and 6 from Beruwala were detected and referred to hospitals,” Lieutenant General Silva said.

He added that in order to facilitate the pensioners who are senior citizens of this country to draw their pensions, tri services have now devised a transport service to take them to their banks from their homes in curfew hours during 2-3 April, payment days. Grama Seva officials in contact with respective members of the tri service personnel could implement this project, Shavendra Silva announced.

DIG Ajith Rohana told the media that a total of 2913 persons who had arrived in Sri Lanka from 16 March to 19 March 2020, the day the airport was closed, had opted for self-quarantine in response to their appeals, which is matter of appreciation.

Similarly, those failing to register with the Police in future would be dealt severely in accordance with Quarantine Act and Criminal Law, he warned.

He added that a special circular issued today to all Police stations by the Police HQ instructed to prosecute all those who attempt to ridicule and insult all state officials, involved in the quarantine process by way of publishing defamatory social media reports, etc.