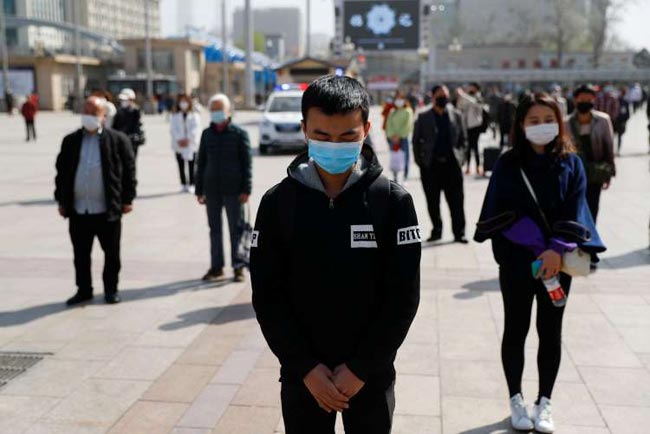 China has stopped to mourn the thousands who have died in the coronavirus outbreak, including “martyrs” such as whistleblower doctor Li Wenliang, while Donald Trump dismissed the advice of US health officials that all Americans should consider wearing masks in public.

In Tiananmen Square and throughout the country, the national flag flew at half-mast on Saturday as people stopped at 10 am to bow their heads for three minutes, while car, train and ship horns sounded and air raid sirens blared in the background.

In Zhongnanhai, the seat of political power in Beijing, President Xi Jinping and other Chinese leaders paid silent tribute in front of the flag, with white flowers pinned to their chests as a mark of mourning. Media outlets such as Global Times and CGTN toned down the colours on the websites and Twitter accounts to simple tones of grey.

More than 3,300 people in mainland China have died the coronavirus, which surfaced in the central province of Hubei late last year. On Friday, the country reported 19 new cases, the vast majority linked to foreign travel, and more than 1,030 asymptomatic patients were under medical observation.

In Wuhan, the capital of Hubei province and the centre of the outbreak, all traffic lights in urban areas turned red at 10am and all road traffic ceased for three minutes. Some 2,567 people have died in the city of 11 million people, accounting for more than 75% of mainland China’s coronavirus fatalities.

Among those who perished was Li Wenliang, a young doctor reprimanded by police in Wuhan for “spreading rumours” when he tried to raise the alarm about the disease. He was later exonerated.

China’s day of mourning coincided with the start of the annual Qingming tomb-sweeping festival, when millions of Chinese families often travel to pay their respects to their ancestors.

However, in Wuhan all tomb-sweeping activities have been banned until at least the end of the month, and many are still in lockdown, leading authorities to encourage the use of online streaming services that allow them to watch cemetery staff carrying out the task.

On pavements and in housing compounds, some residents burned joss paper, a tradition believed to send money and wealth to deceased relatives.

As of Friday, the total number of confirmed cases across the country stood at 81,639, including 19 new infections, the National Health Commission said. Eighteen of the new cases involved travellers arriving from abroad. The remaining one new infection was a local case in Wuhan, a patient who was previously asymptomatic.

China reported 64 new asymptomatic cases as of Friday, including 26 travellers arriving in the country from overseas. That takes the total number of asymptomatic people currently under medical observation to 1,030, including 729 in Hubei.