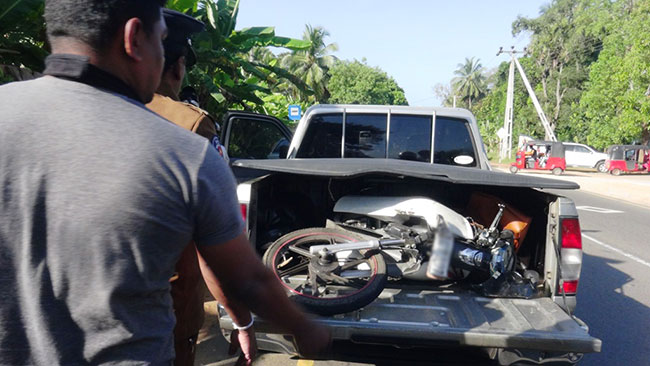 Two persons died after the motorcycle they were traveling on collided with a another vehicle on the Dambulla-Habarana main road at Pelwehera in Dambulla this morning.

The deceased, a married couple, have been identified as W. Punchibanda and his wife R.M. Wimala Dharmasiri, residents of Sevanapitiya in Boruwewa.

Police said that the motorcycle had been traveling from Dambulla towards Habarana when its rider had attempted to overtake the vehicle ahead of them.

However, the motorcycle had come into contact with the other vehicle causing both the motorcycle rider and pillion rider to fall on the middle of the road.

A vehicle arriving from the opposite direction had reportedly run over the married couple killing them instantly. Meanwhile the incident had been recorded on the CCTV camera of a nearby fuel station.

The vehicle involved in the collision, an SUV, had fled the scene following the incident, police said.

A spokesman for Dmabulla Police said that investigations are ongoing to arrest the driver of that vehicle, using the CCTV camera footage.