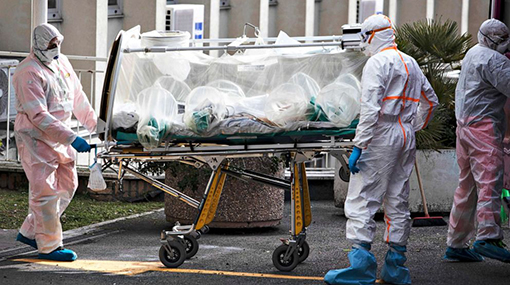 As nearly 200 countries are struggling to battle COVID-19, the deaths from the virus have now mounted over 82,000 and infections have topped 1.4 million worldwide.

New York, the coronavirus epicentre in the United States, has seen 731 fatalities on Tuesday as the death toll reached 4,009 surpassing the fatalities in the city on 9/11.

The United States has suffered a record total of 1,939 deaths in the past 24 hours and more than 12,800 Americans have now died from coronavirus. The country’s cases tally has swept past 400,000.

One of the main models on the outbreak, from the University of Washington, is projecting about 82,000 US deaths through early August, with the highest number on April 16.

Foreign media reported that US President Donald Trump on Tuesday threatened to cut funding to the World Health Organization, accusing it of biasedness towards China. In Washington, Trump told reporters that he was “going to put a very powerful hold” on funding to the WHO, the UN body whose biggest contributor is the US, accusing it of being “very biased towards China.” Trump gave no details about how much money would be withheld and minutes later he said he would only “look at ending funding.”

China reported no new deaths for the first time since the outbreak began in Wuhan in late December and ended the 76-day lockdown on Tuesday on residents of Wuhan. In China, official number of coronavirus infections has topped 81,000 and more than 3,300 deaths were reported but suspicions are rife that Beijing has under-reported the real numbers.

In other developments, the United Kingdom reported 786 new deaths and Spain, France and Italy all recorded new surges in fatalities. In France, over 30,000 people are currently hospitalized with COVID-19 nationwide, with 7,131 in intensive care. The country has confirmed 10,328 coronavirus deaths.

Spain, with 14,045 dead, said its downward trend in new infections and deaths was continuing and that increases in fatalities on Monday and Tuesday were the result of weekend deaths being tallied.

According to foreign media, British Prime Minister Boris Johnson, who was moved to intensive care in a London hospital, remains in stable condition. He was hospitalized on Monday, 10 days after being diagnosed with the virus.

His spokesman said the 55-year-old Conservative leader was in “good spirits,” was receiving “standard oxygen treatment” and has not required a ventilator.

New research showed Britain’s toll on a steeper trajectory than other nations and predicted as many as 66,000 deaths by July.

In the meantime, Japanese Prime Minister Shinzo Abe, after weekslong pressure from public health officials and lawmakers, declared a state of emergency on Tuesday covering Tokyo, Osaka Kanagawa, Saitama, Chiba, Hyogo and Fukuoka prefectures amid the growing outbreak of COVID-19.