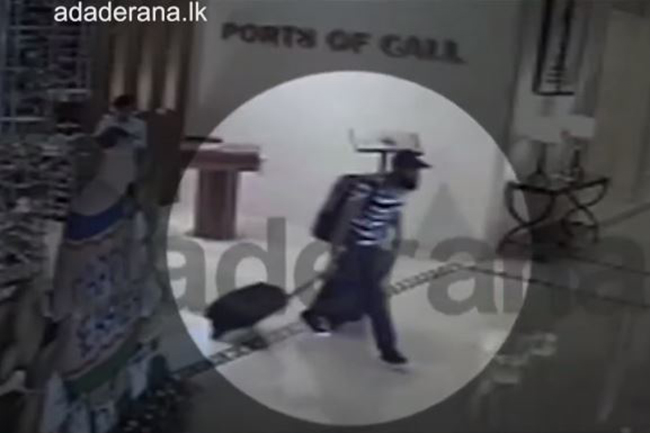 It was revealed before the Presidential Commission of Inquiry (PCoI) on the Easter Sunday attacks that the common practice of the Taj Samudra Hotel is to submit its guests’ details to the State Intelligence Service (SIS) and the President’s Security Division (PSD) on a daily basis.

As such, on the day of the attacks, the hotel submitted a similar list, before the explosions occurred to the two entities, which included the details of the suicide bomber who detonated explosives in Dehiwala.

This was revealed by the Security Manager of Taj Samudra Hotel Sujeewa Fernando, who gave evidence before the PCoI on Easter attacks.

He said the hotel’s CCTV footages had shown that one of the bombers had entered the Taj Samudra Hotel at 4.53 pm on the day before the attacks.

The bomber had stayed at room 365, however, he had exited the hotel at 5.44 pm on the same day and had not returned.

He also noted that the suspect was registered at the hotel under the name Abdul Latif Jameel Mohammed and that a copy of the suspect’s National Identity Card (NIC) was attached to the registration.

He went on to say that it is the common practice of the Taj Samudra Hotel to submit the details of its guests to the SIS and the PSD, on a daily basis.

On April 21, suspect Jameel Mohammed had entered the Taj Samudra Hotel at 7.09 am and the at 8.32 am he had made his way to the hotel’s Ports of Call restaurant, with a backpack and wheeled luggage.

The CCTV footages showed the suspect looking restless, attempting to do something.

While being seated, the rattled suspect is engaged in some attempt involving his backpack, and he even ignores the incoming phone call.

The witness said that the suspect had exited the restaurant with the backpack and a hotel employee brought him to two wheeled luggage, adding that judging by the manner one of the hotel staff lifts one of the luggage it seemed that the bag was empty.

The panel then asked the witness if another suspicious person had visited the hotel before the suspect did. The witness replied that on the 17th of April 2019, at around 1.45 pm, such a person did come to the hotel and had enquired about how to book a room.

Subsequently, 3 three-wheeler drivers who the bomber had hired after leaving the Taj Samudra Hotel gave evidence before the Commission.

The first three-wheeler driver said an individual who looked like a Pakistani national had boarded his vehicle at around 8.55 am.

He said that although the passenger initially wanted to be dropped off in Dehiwala, he, however, disembarked near the Wellawatte market complex.

The second three-wheeler driver, meanwhile, told the Commission that the suspect who boarded his vehicle from Wellawatte asked whether there is a rest house near the Dehiwala zoo.

He said that as per the request of the passenger, he had driven him to the Tropical Inn rest house owned by a person known to him, near the Dehiwala zoo, at around 9.35 am.

Meanwhile, the third three-wheeler driver told the Commission that the individual who had boarded his vehicle at around 1.25 pm near a mosque in Dehiwala, had travelled a short distance and disembarked near the Tropical Inn.

Subsequently, the bomber had entered the Tropical Inn and detonated the explosives at around 1.30 pm.