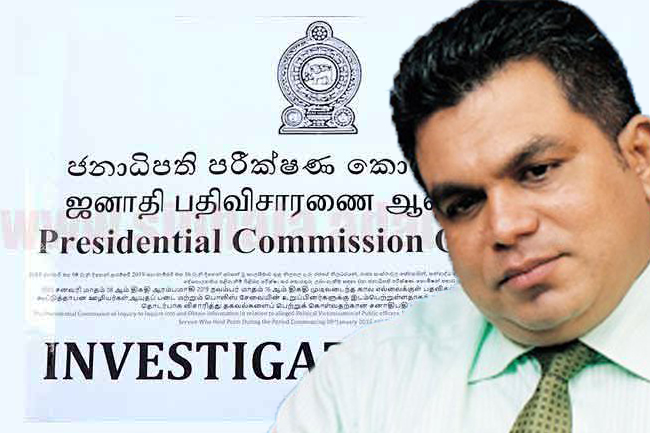 Avant-Garde Chairman Nissanka Senadhipati has revealed that former Director General of the Bribery Commission had offered to release him from all legal proceedings if he implicates Former Defence Secretary and current President Gotabaya Rajapaksa in the case.

He stated this appearing before the Presidential Commission of Inquiry probing incidents of political victimisation during the period of 08 January 2015 to 16 November 2019, on Tuesday (26) to provide evidence pertaining to a written complaint he had lodged before.

He told the panel that revenue of over Rs. 500 Mn was brought to the country via his business and it had provided employment to over 4,500 people.

Senadhipathi went on to say that following the government of Good Governance coming to power, the harbour police station of Galle had inspected the floating armoury ‘M V Mahanuwana’ owned by Avant-Garde, on 18 January 2015, adding that the police had reported information to the Galle Magistrate’s Court on operating an illegal armoury.

Meanwhile, a legal counsel representing Senadhipathi told the Commission, not a single suspect was named, even by the time when 5 years had passed since Galle Police filed the first B-report with regard to inspecting the Avant-Garde vessel, to Galle Magistrate’s Court.

He added that then-DIG in charge of Galle had filed a B-report, saying the vessel was an unidentified one, after he obtained instructions from then-Minister Rajitha Senaratne in person.

Senadhipathi meanwhile told the Commission that he was politically victimized in an attempt to imprison former Defence Secretary and current President Gotabaya Rajapaksa, pertaining to a legal case.

He went on to say the former Director General of the Bribery Commission Dilrukshi Dias had told him that she will release him from all legal proceedings if he signs an affidavit saying money was given to former Defence Secretary Gotabaya Rajapaksa pertaining to the Avant Garde case.

Senadhipathi added that Dilrukshi Dias has later apologized over her actions and confessed she filed cases against him and Gotabaya Rajapaksa over political pressure.