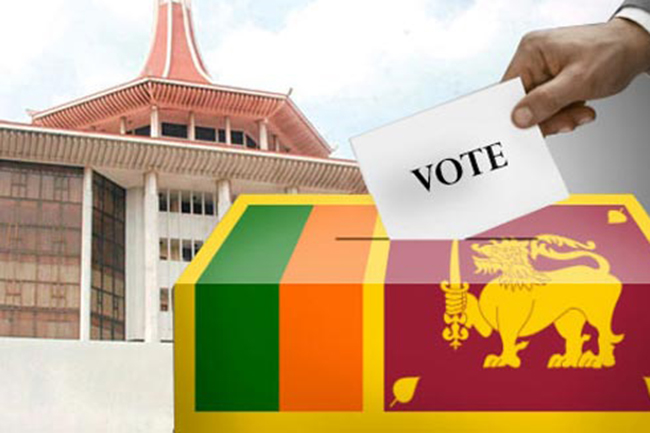 The Supreme Court has commenced further hearing of the Fundamental Rights petitions filed challenging the date set by the Elections Commission for the General Election, for the 7th day a short while ago.

When the petitions were heard on Tuesday (26), making submissions on behalf of the Attorney General and the Director General of Health Services Dr. Anil Jasinghe, Additional Solicitor General Indika Demuni de Silva told the court that March 16, 17, 18 and 19 were declared public holidays, days after the President had issued the gazette notification.

Although the petitioners challenge the nomination process being carried out during public holidays, they had not raised objections while submitting nominations, the Additional Solicitor General pointed out.

Quoting the statement issued by the World Health Organization (WHO), she said, whether a vaccine is found or not, people will have to learn to live with COVID-19 as the virus may never go away.

The Additional Solicitor General, therefore, questioned if the petitioners’ argument is that having an election is a forever risk.

She also submitted a confidential intelligence report directed to the President by the Chief of State Intelligence. Pointing out the data compiled in the report, the Additional Solicitor General noted that no community infections were reported since the 1st of May and the sudden increase in the number of cases was due to the coronavirus-positive patients detected among the repatriated Sri Lankans.

Chief Justice Jayantha Jayasuriya has then informed the Additional Solicitor General to hand over the intelligence report to the Election Commission, as it would be important for them to make a decision on the date of the election.

Additional Solicitor General went on to say that the petitioners have sought a ‘Supreme Court interpretation of the term “public service” in a backdrop where clear provisions are provided to the President via the Constitution to draw funds from the consolidated fund for public service in a situation where the parliament is dissolved.

She pointed out that the petitioners have no power to seek interpretations of the Constitution and they can only seek relief from court, if their fundamental rights are violated.