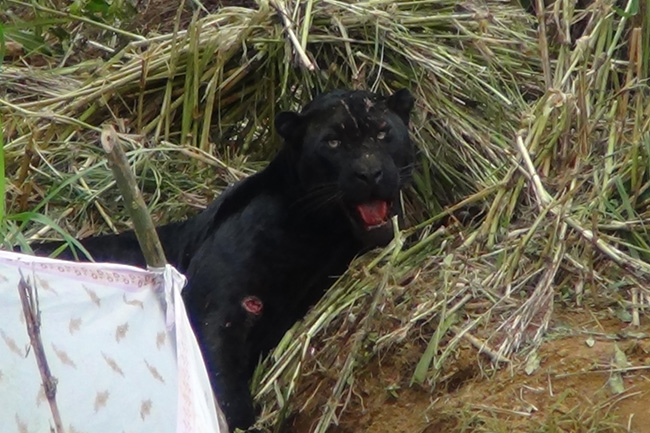 Hatton District Judge and Magistrate’s Court today (29) called for a post-mortem of the rare black panther that died this morning (29) after it was rescued from a wire trap in Nallathanniya three days ago.

The post-mortem examination will be conducted at the Faculty of Veterinary Medicine and Animal Science at the University of Peradeniya. Its report is to be submitted to the court on the 29th of July.

Presenting submissions on the incident, the wildlife guard at Nallathanniya Wildlife Sanctuary Prabash Karunatileka said the wounded black panther died while being treated by the veterinary surgeons at the Elephant Transit Home in Udawalawa National Park.

He requested the court that the post-mortem examination of the black panther be carried out at Peradeniya University’s Faculty of Veterinary Medicine and Animal Science, and not at the veterinary hospital at the Elephant Transit Home.

Sri Lankan Panther, scientifically knows as Panthera pardus kotiya, is classified as an endangered species, he pointed out, adding that there are only six black panthers in the forests near Sri Pada. Conducting the post-mortem examination at the Peradeniya University will determine the definitive cause of the death of the black panther, he told the court.

Taking into account the submissions by the officers of Nallathanniya Wildlife Sanctuary, the court ordered to obtain genetic material of the black panther and to keep it stored at the University’s Veterinary Medicine Faculty for forest conservation purposes.

The wildlife officers had emphasized that this animal had not sustained life-threatening injuries, adding that despite the request to the veterinarians to treat the animal, the veterinarian team had taken the animal to the Udawalana National Park, insisting on further treatment.

The rare black panther, found wounded in Nallathanniya, died this morning (29) while being treated at the Elephant Transit Home in Udawalawa National Park.

It was found by wildlife officers, caught in a wire trap near a vegetable cultivation, on Tuesday (26).

The wounded animal was initially taken to the Randenigala Veterinary Hospital and later transferred to the veterinary hospital at the Elephant Transit Home for further treatment.

According to wildlife officials, this black panther was an 8-year-old well-grown male, about 8 feet in length and 4 feet in height.

On Wednesday (27), an employee at the vegetable cultivation was arrested on suspicion of setting up the trap.

The Sri Lankan Panther has been a mystery for many years and sightings throughout recent history have been very rare due to the low population numbers and the solitary nature of the animals.

However, in January this year extraordinary new footage had emerged showing the sighting of five panthers roaming freely in forests near Adam’s Peak.