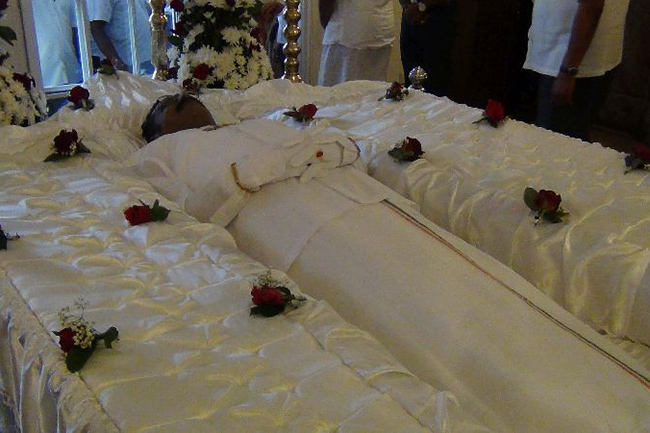 The final rites of late CWC Leader and Minister Arumugam Thondaman are expected to be carried out with State honours tomorrow (31), at the Norwood Ground in Hatton.

In the meantime, his remains are to be placed at the headquarters of the Ceylon Workers Congress (CWC) in Kotagala, prior to the funeral.

When the remains of the late leader of estate workers were brought to his homeplace in Ramboda, Kotmale yesterday (29), a large number of people including politicians had paid their last respects, Ada Derana reporter said.

On Thursday morning (28), the remains were kept Lying-in-State in the Assembly Hall of the Parliament.

President Gotabaya Rajapakshe, Prime Minister Mahinda Rajapakshe, ministers and former parliamentarians including the former Speaker of 8th Parliament Karu Jayasuriya, foreign diplomats, the staff of the Parliament and officials from departments and institutes affiliated to the Parliament were among the dignitaries who arrived at the Parliament Complex to pay their last respects.