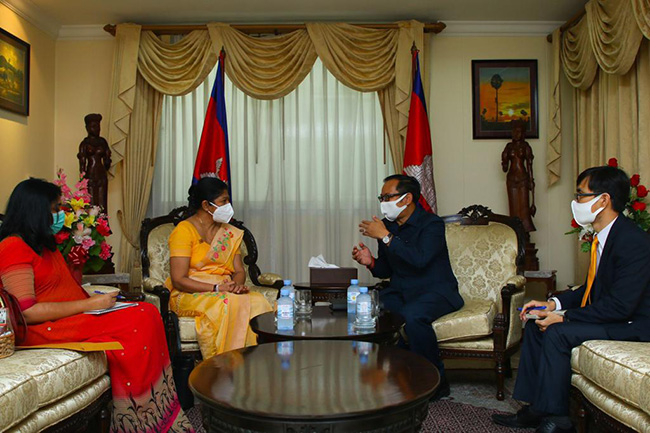 She has conveyed a message of felicitations from Sri Lanka’s Foreign Secretary Ravinatha Aryasinha to his counterpart Ouch Borith, Cambodia’s Secretary of State of the Ministry of Foreign Affairs and International Cooperation.

Recalling the long-standing traditional relations between the two countries based on the bedrock of Theravada Buddhism, the two Ambassadors have exchanged greetings on the occasion.

In the prevailing health crisis, the meeting was seen as a possible alternative to demonstrate the continued interest and importance placed on furthering the bilateral relations of the two countries.

It was agreed to look for the earliest occasion to operationalize the Memoranda of Understanding already agreed upon between the two Foreign Ministries and the respective Chambers of Commerce.

The two Ambassadors also exchanged views on opportunities to work together to promote Buddhist trail tourism and trade between the two countries.