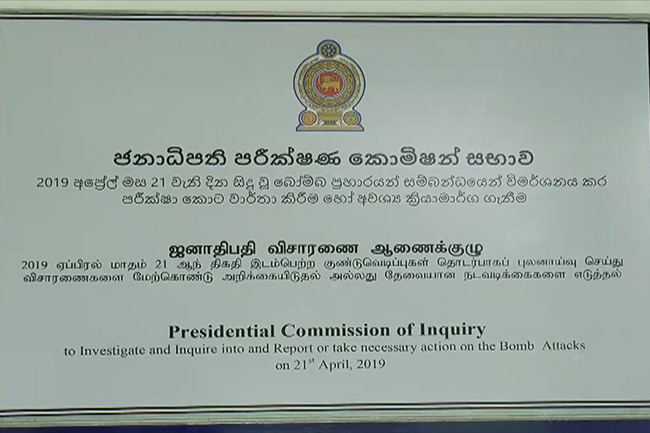 The Presidential Commission of Inquiry probing the Easter Sunday attacks heard emotional testimonies from attendees of the Zion Church’s Easter Sunday services where they described several interactions with the bomber prior to the fatal incident.

The Pastor of Zion Church Ganeshamurthy Thirukumar revealed that on the morning of 21 April 2019, an unfamiliar person was observed loitering within the church premises. When approached, the suspicious person has identified himself as ‘Umer’, claiming to have visited the church to observe the services.

However, when the pastor invited the suspect to enter the church, he had declined, stating that he is seeking blessings for his sick mother.

Responding to a question raised by the Commission, the witness said, although the suspect conversed in the Tamil language, he was identified as a Muslim due to his use of the term ‘umma’ when he referred to his mother.

He added that the suspect, who was carrying a large backpack, wore a pink-colored T-shirt and held a cap to his chest which contained a much smaller bag inside it.

The suspect had left the church premises after the pastor introduced him to Brother Stanley, who was instructed to take down his details.

The witness told the Commission that just 5km away from the Zion Church, he had received a call informing him of the incident.

Following this, the witness, who broke down in tears, told the Commission of the death of his 12-year-old son in the explosion.

He added that he was only able to identify his son from a fragment of the shirt that he had purchased for [his son] that day, which was found on his mangled remains.

Brother Nagaiah Stanley, who was then called to testify before the Commission, said the suspect had declined a further invitation to enter the church, claiming that he needed to attend to a phone call.

He went on to say that he was suspicious of the suspect’s intentions due to [the suspect’s] appearance akin to that of an ISIS member.

Brother Stanley added that a layperson of the church had told him the suspect was seen loitering during Good Friday services as well.

He had then instructed two other churchgoers to question the suspect further, which turned into a heated exchange before he detonated the explosive device.