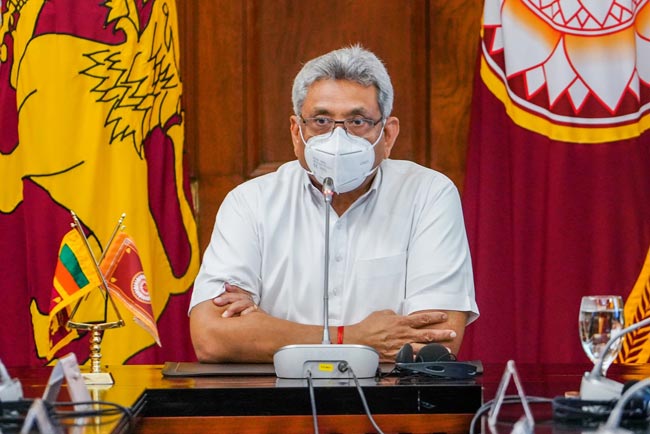 President Gotabaya Rajapaksa has emphasized that crimes operated by underworld kingpins and drug mafia from prisons must be put to an end without delay.

Specific information relating to criminal activities and drug peddling operated from prisons has been received and the general public is appalled by this situation, President said.

“This has to be rectified. Use of mobile phones within prison premises should be completely eradicated” President added.

President Rajapaksa made these comments during a discussion with the Prison officials to review the current status of prisons held at the Presidential Secretariat today (01).

If Prisons or Police reach a state of collapse, it will adversely affect the maintenance of law and order in the country. President said he always welcomes the right conduct on the part of officials despite their political loyalties.

President Rajapaksa emphasized that the existing shortcomings of the Department of Prisons will be removed and the system will be entirely overhauled.

This restructuring process will be implemented through a committee comprising Secretary Defence, the Army Commander, and the Inspector General of Police, stated President’s Media Division.

The President also advised relevant officials to conduct all actions including the training of officers and providing incentives under a supervisory team.

The President further said that corrupt and inefficient officers should be identified and appropriate decisions should be taken regarding them.