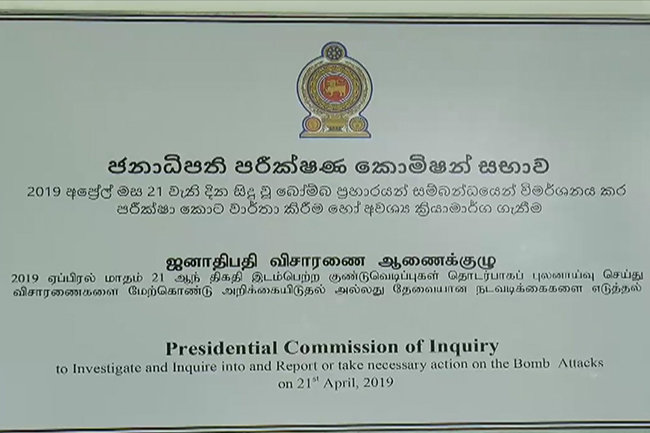 In the CCTV footage revealed to the public by the Presidential Commission of Inquiry (PCoI) probing the Easter Sunday terror attacks, a second explosion is witnessed following the detonation of a device by Fathima Jiffry – the wife of Shangri-La bomber Ilham Ahmed – that claimed the lives of several Police officers, and her children.

In another footage, Ilham Ahmed’s movements leading up to days before the bombings are also shown raising further questions about his accomplices.

The first set of CCTV footage, released to the public by the Presidential Commission of Inquiry, shows a black car arriving at the residence of Mohamed Ibrahim at Mahawila Gardens in Dematagoda on 19 April 2019 at 6.54 pm and leaving at 7.03 pm.

The individual seen exiting in the car is the suicide bomber at the Shangri-La Hotel, Mohamed Ibrahim Ilham Ahmed. Later that night, the bomber returns home and is seen exiting the house at 12.02 am carrying two bags which he hands over to another individual wearing a cap.

With the identity of the second individual still unknown, the relevant footage was not revealed to the public.

In the CCTV footage from 20 April 2019, Ilham Ahmed is seen returning to the residence carrying a backpack and holding another bag in his hands. He is being admitted into the house by his brother Mohamed Yusuf Ijaz Ahmed.

Further footage from 21 April 2019 at 1.24 am shows Ilham Ahmed exiting the residence wearing a red t-shirt and a cap. His wife, Fathima Jiffry is seen watching at the gate as he leaves.

On that fateful day, at 2.31 pm, the footage shows the Colombo Crimes Division (CCD) team arriving at the location and Sub-Inspector (SI) Rohana Bandara and four other officers entering the house. The first bomb goes up at 2.36 pm claiming the lives of SI Bandara and three other officers.

Police Sergeant Wasantha Kumara who entered the house with SI Bandara testified at the Presidential Commission of Inquiry on Wednesday.

He said that upon entering the house, two other males were noticed inside and he was instructed to search the ground floor while SI Bandara proceeded to the upper floor.

As he searched the ground floor, Sergeant Kumara had heard SI Bandara knocking on a room door on the upper floor attempting to gain entry. He added that SI Bandara was then heard calling out to the inmates of the room to open the door and following a few attempts, a loud explosion was heard.

Testifying further, Sergeant Kumara said he subsequently called for back up at which time a group of Criminal Investigation Department officers responded and a short while later the second bomb had exploded.

Following this, the officers had entered the upper floor room only to find the remains of the police officers, one female and several children.

In the meantime, brother of Fathima Jiffry testified at the PCoI on Tuesday. He stated that his family was a traditional Muslims and that his sister had had a normal upbringing. He added that when his sister was 20 years of age, his family agreed to an arranged marriage between Ilham Ahmed and Fathima Jiffry.

After getting married, Fathima Jiffry had turned to extremist beliefs, her brother divulged. Fathima’s beliefs changed to the extent that she railed against the traditional Muslim faith being practised and boycotted his own wedding ceremony.

Fathima had continued to criticize the family’s religious traditions and practices and proceeded to withdraw from the public while cutting off connections with her own family, he noted.

The witness said that he realized his own sister had been brainwashed following an incident where she stated that she would follow in the footsteps of her husband.

He also revealed that following the first explosion on 21 April 2019, Fathima had telephoned her mother and pleaded with her to come to the Dematagoda residence without delay.