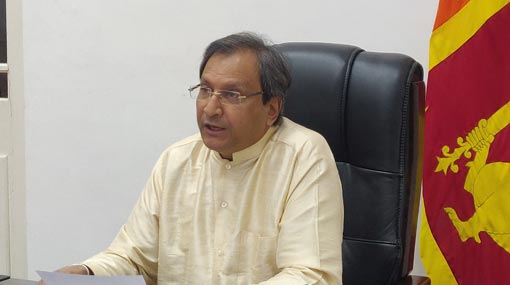 Foreign Secretary Ravinatha Aryasinha has observed that despite its immediate gloom, the present situation has been an eye-opener in many respects that could help correct structural, procedural, and human interface incongruities in Sri Lanka’s labour migration.

It also presents an opportunity for Sri Lanka to re-orient foreign employment in a post-COVID-19 world, sensitive to the ground realities in both Sri Lanka and the migrant labour receiving countries, so that the future footprint of Foreign Employment Sri Lanka will provide the world – though probably Smaller, could be Smarter and more Sustainable, said Ariyasinha.

The Foreign Secretary made these observations when he addressed the 33rd Annual Session of the Organization of Professional Associations (OPA) via a video link, on the theme “The Role of Foreign Employment in the Economic Revival of Sri Lanka; Challenges and Opportunities”.

Secretary Aryasinha said the Covid-19 crisis had exposed the significant number of Sri Lankan migrant workers abroad who are undocumented/irregular, and as a result are ineligible to avail of medical and other benefits in their host countries, and are also vulnerable to deportation if identified. Also many of them non-registering with the SLBFE were a matter of concern.

It is believed that some, who might have originally registered at the point of leaving the country, might not have subsequently renewed their registration. He urged that they register so that they enjoy the benefits of an expanded social safety net, as successfully practiced by migrant workers in countries like the Philippines, where the percentage of registered migrant workers is 96.8%.

He said, even for those who are legal, a consequence of Covid-19 has been the shrinking of the employment market, particularly with the increasing cases of unemployment, loss of contracts, non-extension of work permits, and halting of temporary freelance work, which have left many of them largely destitute. It was noted that this could lead to a serious shortfall in the numbers of migrant workers who will leave for work this year and in turn a drop in worker remittances. In 2019, migrant worker’s remittances to foreign exchange earnings were 25.5 %, while its contribution to Sri Lanka’s GDP was approximately 8%.

Secretary Aryasinha said the present situation could help in building more forward-looking and resilient policies and strategies that can ensure ‘sustainable and just economies’. He noted that Sri Lanka which has had the opportunity to design and provide input on certain crucial regional modalities within the Colombo Process and the Abu Dhabi Dialogue–which brings together the Asian migrant labour sending countries and also connects them with the labour receiving countries in the GCC, could together with the ILO and IOM, also play a greater role in the post-COVID scenario for the benefit of the migrant workers, as well as the sending and receiving countries.

- ensuring the outward flow of a better trained and skilled migrant worker, one who will while able to earn more, is less likely to face the vulnerabilities presently encountered by the average Sri Lankan migrant worker, particularly the unskilled workers,

- combine market research platforms to generate vocational training programmes that will serve future job markets and economic demands in countries post Covid-19, and recalibrate to inspire a workforce that meets that demand,

- re-formulate our education systems, and re-orient students to be a rich human resource pool for future labour markets,

- ensure that ‘migrant health’ becomes a cornerstone in the management of migrant populations.

The Foreign Secretary emphasized that the recent crisis has helped break the silos and ensure better intra-governmental coordination in dealing with matters concerning migrant workers – both in Colombo, as well as in the destination countries.

He said, “This augurs well for future collaborative efforts as an essential element that has helped us to thrive in this unprecedented circumstance to deliver as one. We should now look forward to further strengthening and build in a strong protocol for the ‘whole of government’ approach on issues concerning foreign employment”.