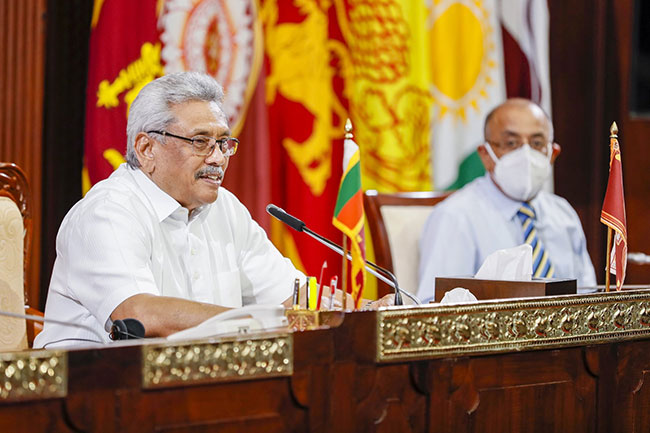 President Gotabaya Rajapaksa assured to extend fullest assistance to protect artistes integrating them into the local economic environment without waiting for the world to win against COVID-19.

“During former President Mahinda Rajapaksa’s tenure the contribution of artistes were sought for various activities.” This was instrumental in artistes from top to bottom to provide their aesthetic contribution, the President said.

The President said the ground work will be created to harness lost opportunities in the face of COVID – 19 pandemic.

President made these comments during a discussion on issues faced by the artistes held at the Presidential Secretariat today (01).

Prof. Mudiyanse Dissanayaka pointed out the importance of teaching aesthetic subjects up to O/L and A/L. President said this proposal will be forwarded to the Task Force on “National Education Policy”.

The reasons for not receiving royalties by the artistes domestically as well as internationally were discussed in depth. The country has lost more than USD 20 million foreign income due this situation, the PMD said.

The artistes informed the President that they do not receive royalties for songs broadcasted over local electronic media either. The President and the Prime Minister said measures will be taken at the government level to rectify the situation and to protect the rights of the artistes.

The government’s decision to offer loans for the artistes under a low-interest-rate was admired; however the failure to implement this decision by state, banks was also highlighted during the discussion.

Artistes also conveyed the importance of taxing foreign content and pooling it for the benefit of local artistes. It was decided to launch the project proposal to allow foreign movie makers to do their shootings in local landscapes in exchange for foreign currency. The requirement to look after individual artistes in rural areas at divisional and provincial levels was also discussed.