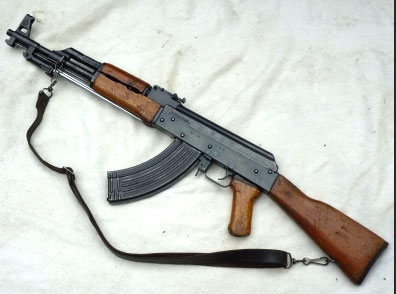 The Criminal Investigation Department (CID) has recovered a T-56 assault rifle from Athurugiriya, which is believed to be one of the firearms missing from the underworld weapons haul recently discovered at Pitipana, Homagama.

In the raid carried out last night (01), a suspect was taken into custody along with the T-56 rifle. He was identified as a 38-year-old residing in the area of Habarakada.

Further interrogations into this suspect have led to the discovery of 04 hand grenades, a pistol, 02 detonators, a locally manufactured firearm commonly known as “Gal Katas”, 10 repeater shotguns, a pair of handcuffs, an air rifle, 600 rounds of ammunition and D.V.D. player.

On June 29, the Special Task Force (STF) had recovered a stash of weapons during a raid carried out at a four-story shop in Pitipana, Homagama.

The raid was carried on the tip-off that a weapon stash belonging to the underworld figure and drug racketeer ‘Gagana’, who is currently imprisoned, was hidden at the location.

The STF had found a total of twelve T-56 firearms in the raid while it is considered to be the largest stash of firearms belonging to an underworld crime gang, found in Sri Lanka.

Further, a suspect identified as an accomplice of ‘Gagana’ has also been arrested along with the stash of weapons.

It was later reported that the weapons storage was owned by the noted underworld gangster Kosgoda Tharaka.

However, police suspected that several firearms from the stash were missing and had launched investigations to track them down.

On Wednesday (01), the Police arrested a female linked to a suspect in a recent arms haul, along with weapons and ammunition in her possession at Pitipana, Homagama.

These two suspects have been handed over to the Criminal Investigation Department (CID) for further investigations.