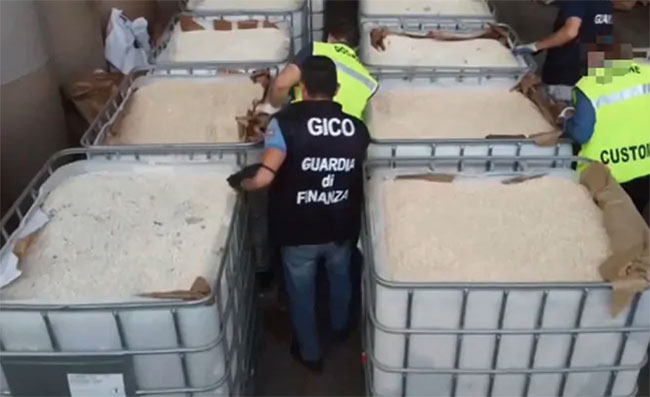 Italian police are claiming to have made the biggest amphetamines bust of all time after seizing 14 tonnes of drugs allegedly produced in Syria by the Islamic State (IS) group.

Investigators on Wednesday said they impounded three container ships that had docked in the southern Italian port of Salerno and found 84 million pills inside machinery and large paper cylinders.

The 14 tonnes of drugs would have raked in about 1 billion euros ($1.6 billion) in street sales had they ultimately made it to consumers, customs police said.

Colonel Napolitano said on Italian state radio that investigators believed the drug’s production provided IS with vital revenue for its militant activities.

Investigators hypothesise that amphetamine production in Europe has been hampered by the pandemic lockdown, and so drug traffickers may have turned to Syria-based producers to fill the market.

“It is possible that the local Camorra crime groups are involved in this business,” Lieutenant Colonel Giordano Natale told Reuters.

The amphetamines were labelled “captagon”, the street name for a drug whose chemical base was originally fenethylline.

However, according to the United Nations Office on Drugs and Crime World Drugs Report 2020 what drug organisations call “captagon” these days is usually a mixture of amphetamine, caffeine and other substances.

It’s unclear whether the drugs seized in Italy were fenethylline-based or a substitute.

Used in the 1960s to treat narcolepsy and depression, Captagon is one of several brand names for fenethylline hydrochloride, a drug compound belonging to a family of amphetamines that can inhibit fear and ward off tiredness.

The imitation captagon is popular in the Middle East, and widespread in war-torn areas such as Syria, where conflict has fuelled demand and created opportunities for producers.

Production was initially concentrated in Lebanon and IS sells it to finance its activities, police said in a statement.

It said captagon was known as the “drug of the Jihad” after being found in militant hideouts, including one used by the Islamists who killed 90 people at the Bataclan theatre in Paris in 2015.

Two weeks earlier, a much smaller shipment of the drug was also seized in Salerno’s port in a shipment of clothing.

Salerno is about 50 kilometres south of Naples in the Campania region, the historic base of the Camorra, where drug trafficking is one of the syndicate’s revenue-makers.

Police used electric saws to cut through two-metre-high cylinders, made thick enough to try to elude customs’ scanning devices, to remove the pills in the hollow centres.

Video of the bust shows heavy machinery being used to lift the cylinders and pour the pills into huge baskets.

In 2019, Greek authorities claimed to have made the biggest amphetamines bust of all time after seizing 5.25 tonnes of captagon, also produced in Syria.