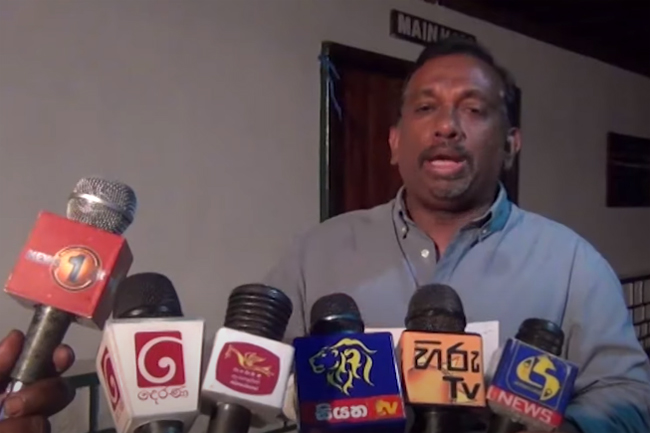 The police failed to record statements from the persons accountable for fixing the final at the 2011 ICC World Cup, former Sports Minister Mahindananda Aluthgamage alleges.

Speaking to the media on Friday (03), Aluthgamage said he has submitted all relevant details regarding the match-fixing allegations to the Sports Ministry’s Special Investigation Unit (SIU) when he recorded a statement with the panel recently.

“I told the SIU precisely that the players were not involved in this. I don’t know on what basis the SIU recorded statements from Mahela Jayawardena and Kumar Sangakkara,” the former Sports Minister said.

The probes into the allegations were halted citing lack of evidence, however, the SIU has informed him that the investigations cannot continue based on the Prevention of Offences Relations to Sports Act as it was passed in 2019 and the match-fixing allegations were from 2011, Aluthgamage says.

When summoned to the SIU, the attorneys representing Captain of the Sri Lanka Team at the World Cup 2011 finals Kumar Sangakkara have pointed out that the players are not liable to provide testimonies on the matter because the Act is not valid for the allegations, he added.

That is when the SIU realized that it cannot go ahead with the probes they launched into the allegations, Aluthgamage said.

He went on to say that the SIU recorded a statement only from then-selection committee chief but failed to obtain the statements of the chairman and secretary to the Sri Lanka Cricket Board, executive officers and other relevant officials.

As per this Act, the SIU cannot probe the incident, Aluthgamage pointed out, adding that the International Cricket Council (ICC) should conduct an investigation in this regard. The former Sports Minister says he sought the President to carry out an investigation on the matter.