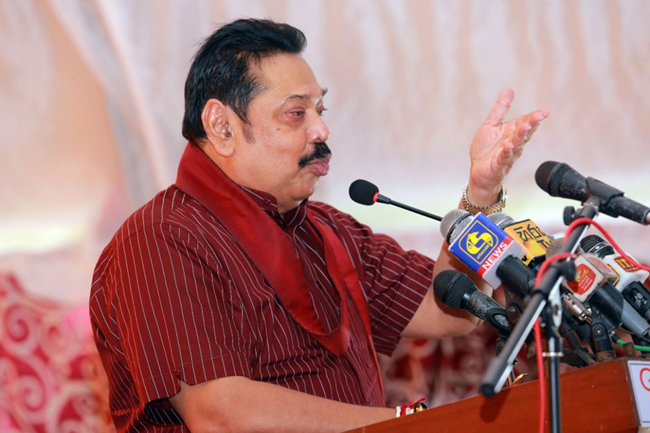 Will introduce laws to prohibit sale of countrys resources  PM

Laws will be brought forward to prohibit the sale of the country’s resources, says Prime Minister Mahinda Rajapaksa.

“As the former President of the country, I initiated and carried out the development of the whole country. We constructed a port, an airport, an international cricket ground and an expressway in Hambantota,” the Premier said addressing a public meeting in Beliatta on Friday (03).

He said the UNP-led government sold the port built during his administration. “They stored paddy at the airport we built. They influenced the Cricket Board to withhold permission for cricket matches being played at the Hambantota Stadium and they even dismissed the panel. Yoshitha, Namal, and I were sued for various allegations. These actions display the mentality of the UNP,” PM Rajapaksa continued.

He said the UNP has split into two factions and it is now beyond repair, adding that this was subtly carried out by the leader of the Samagi Jana Balawegaya (SJB) Sajith Premadasa. Not only will the UNP receive the lowest number of votes but it will also mark the end of the oldest political party in Sri Lanka, the PM noted. This is a good opportunity for everyone to reflect on what services he has done for the public while he was appointed as a Minister for five years, he added.

“We work together to build this country as one nation. We have a president who is determined to take this country forward and we have many initiatives that will transform our nation. Due to this, it is vital that the President’s party is strengthened and secures the majority of the Parliament. We do not want a repetition of the Ranil-Maithripala conflict as the damage done by such conflicts will directly impact our people.”

PM Rajapaksa said he recently met with a Trade Union of Ports and resolved their issues through a successful discussion. “However, it became clear that we now have to pay the dues of mistakes done by the previous government who has already sold most of our country’s resources. Nonetheless, we have a responsibility to respect and uphold agreements signed with other countries.”

A new system has to be devised to prohibit the sales of our resources, the PM said further, adding that he intends to introduce a proposal to get the Parliament’s approval when signing diplomatic agreements.

“Since the day we came to power, there have been many parties who intend to topple our government. I hope our people will take the right measures to protect the government from such individuals,” the PM continued.