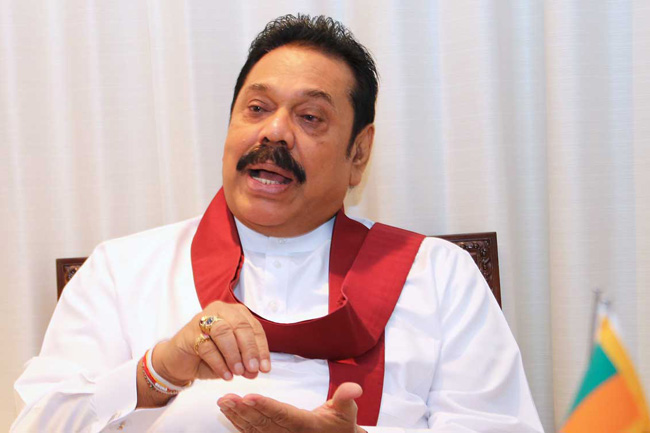 Prime Minister Mahinda Rajapaksa claims that the political ‘mara-senawa’ that came together to capture power through the presidency and to “divide the country” after “trampling underfoot the majority” community, was made up of the same elements in 2010, 2015 and 2019.

These political parties which were earlier with the UNP, have now shifted their allegiance to the Samagi Jana Balawegaya (SJB) on the grounds that UNP leader Ranil Wickremesinghe is incapable of winning the required number of Sinhala votes whereas Sajith Premadasa is better positioned to do so.

“We see the Samagi Jana Balawegaya trying to fulfil their side of this bargain by giving election pledges such as an allowance of Rs. 20,000 for every family. They tried to win the presidential election also with promises of various handouts,” he charged.

Issuing a statement, the PM said that a political party that caters to a single ethnic or religious community only looks after the narrow interests of that group and considers other communities to be outsiders or even enemies.

“Our most recent experience of the dangerous consequences of this brand of politics was the Easter Sunday terrorist attack. When a given political party restricts itself to just one ethnic or religious group, they too become prisoners of circumstances.”

He said that ehen the extremist preacher Zaharan Hashim built himself a small following in the East, communal political parties had to compete for the votes of that group. “That enabled this extremist to summon all communal candidates for election in that district and even impose conditions on them.”

“Ultimately the extremists indirectly controlled the government. The yahapalana government was not able to prevent the Easter Sunday bombings because they had fallen victim to this brand of politics,” he said.

He said that the politics of trampling the majority community underfoot and obtaining privileges for one’s own community through political extortion never existed in the past and that the reason this “poisonous political culture” has flourished up to this point is because those engaged in such politics have benefitted enormously from it.

He stated that the people defeated that brand of politics at the 2019 presidential election. If we are to see the kind of frienship and cooperation that existed between the various communities in this country in times past, we have to ensure that those who engage in narrow minded communal politics are not able to benefit from it, the PM added.

“It’s only then that a new generation of Ponnambalams, Duriappahs, Hameeds and Moulanas will emerge from among the younger generation.”