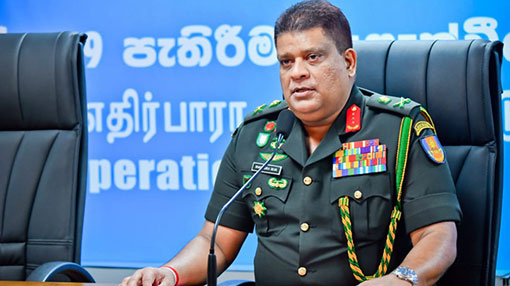 Head of the National Operation Centre for Prevention of COVID-19 Outbreak (NOCPCO), Commander of the Army Lieutenant General Shavendra Silva, today clarified the details pertaining to the latest situation following the detection of a new cluster of coronavirus cases.

Speaking to reporter in Colombo today, he revealed that there are close to 1,150 inmates and staff members at these two drug rehabilitation centers in Kandakadu and Senapura  in the Polonnaruwa District.

He said that the PCR test reports of over 375 persons from these centers including inmates and staff members have been received so far.

He said that PCR tests were also carried out yesterday and today. “When comparing with the results received thus far, it is most likely that even more Covid-19 infected persons will be identified,” he said.

The Army Commander said that all necessary steps have already been taken to control the situation at these two rehabilitation centers.

He said that several staff members working at these centers had gone on holiday as of yesterday and that a majority of them have been brought back to the centers. A few more of them are expected to report to these centers within today, he said.

He said that the family members of these staff members who had returned home on holiday have been directed to self-quarantine.

Silva said that a host of rumours and false information are being spread regarding the Covid-19 situation and assured the masses that any instances of new cases being detected form cities or closing off of villages will be revealed to the country, as has been the norm thus far.

He said that all possible measures have already been initiated to prevent the transmission of the virus to society.

He said that on July 04 a group of 116 relatives and loved ones of inmates of these rehabilitation centers had been allowed to visit them while adhering to health guidelines such as social distancing.

All of these visitors have been identified and will be directed to quarantine.

He urged the public to be more cautious as more and more infected expatriates are returning home and appeals the public not to be duped by false and misleading rumours as all measures have been adopted to avoid any transmission of the virus to society. He went on to say:

“Ministry of Justice-managed two Rehabilitation Centres for Drug Prevention, Treatment and Rehabilitation, managed by Ministry of Justice in Kandakadu and Senapura areas in the Polonnaruwa district have a total of 1150 detainees, inclusive of employees of different state agencies. After detection of a COVID-19 positive detainee from the Welikada Prisons on Tuesday (7) who had returned from Kandakadu Rehabilitation Centre, all prison detainees and prison staff were subjected to about 700 PCR tests, but all of them were confirmed negative to the virus. On the same day (7), all individuals inside that Kandakadu Rehabilitation Centre underwent PCR tests and found 57 of those individuals, subjected to PCR tests were confirmed positive to the virus. Of them, was one female who is serving the Centre as an instructor, but currently on leave in Marawila area. Soon after she was diagnosed positive, her parents, family members and her associates have now been referred to PCR tests, kept in quarantine by the Army and are awaiting results of those reports.”

“In view of the numbers on duty and detainees at both Centres, both HE the President and Hon Prime Minister instructed me to immediately take steps to convert the nearby Army-managed Kandakadu Quarantine Centre to be a field hospital where some 500 COVID-19 infected persons can be treated, anticipating further increase in positive cases upon receipt of PCR Test results. Accordingly, as of this morning (10), 196 more individuals were confirmed positive COVID-19 patients, thus increasing the total to 253, together with 57 confirmed ones earlier on Thursday (9) evening, all of who are now receiving treatment in this new field hospital. It is believed that the infection would have been brought there by a few convicted drug addicts who had been brought there on a Court order a few days ago or by 116 visitors who had visited those relatives under rehabilitation on 4th July after restrictions were lifted. All of those visitors had been identified and are now kept in quarantine,” he remarked.

“Possibilities of transmission of the virus to society are minimal but more infected ones could be found among those who were serving both those Centres in the next couple of days after PCR tests, I anticipate so. Similarly, 8 more instructors of those same Centres currently on leave have been identified and are being brought back for quarantining without taking any risk or delay,” Lieutenant General Shavendra Silva said.

“The public need to be cautious as more and more infected expatriates are returning home from abroad, although all standard health precautions and guidelines are strictly followed. Similarly, I very humbly urge the general public not to be misled by rumours or false stories doing rounds as the Government Information Department, COVID-19 Centre (NOCPCO) and the President’s Media are always ready to place true facts before the public,” he appealed.