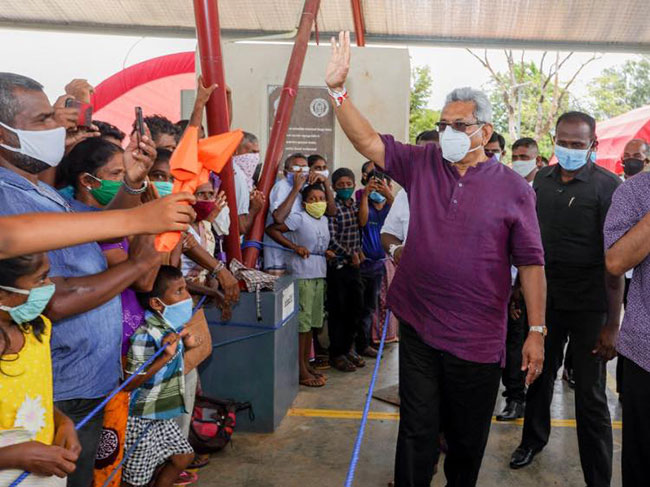 President provides solutions to grievances of people in Matale

Residents told the President that they have to face many hardships due to the inability of the previous government to complete the construction of Raitalawa Bridge, which had commenced during former President Mahinda Rajapaksa’s time, the PMD said.

This has caused the people in the area to travel an additional 15km between the Provincial Council of Ambangan Koralaya and Pallethanna Divisional Secretariat. Construction of the road in Kumbalthota in Kaikawala had stalled too.

The President contacted the Secretary to the Ministry of Road and Road Development W.R. Premasiri via telephone and instructed to expedite the construction work of the bridge and the road.

Heeding to a request made by the students of Montigolla Primary School to provide them with desks and chairs, the President directed the Minister of Education to take remedial action.

People also requested the President to provide solution to the issue of water scarcity in Laggala by expanding Matale Sub Water Scheme and to revive the e-Nenasala project enabling children to gain the knowledge of computer technology.

These proposals were made to the President during a public gathering organized by Saman Wijenayaka at Metihakka Public Ground in Ambanganga, Laggala.

The residents in Laggala apprised the President of several issues including the loss of land arisen due to Moragahakanda Project, drinking water problem and lack of essential infrastructure facilities. People made these requests at a meeting organized by Thilak Bandara at Laggala Bus Stand. President assured solutions to these problems before long.

The President also attended the public gathering organized by Lakshman Wasantha Perera in Naula. A set of proposals for the Development of Matale was handed over to the President during the meeting.

People in Palapathwala said water supplied by Pradeshiya Sabha in Ambangana Korale is not suitable for drinking purposes. President said he will instruct the relevant officials to look into the matter. This meeting was organized by Nalaka Bandara Kottegoda.

Public gatherings organized by Rohana Dissanayake near the Children’s Park in Matale and Samantha Dharmasena in Ukuwela, Raththota were also attended by the President.

People highly commended the measures taken by the President for the benefit of the country during the past few months, the PMD said.

Earlier in the day, farmers requested the President, when he joined the public gathering organized near the Galewela Children’s Park, to guarantee a fixed price for onion to be supplied to the market.

President Rajapaksa discussed with farmers regarding the importance of adopting value-addition techniques to obtain higher prices for pepper growers.

The President also joined the public gathering organized by Pramitha Bandara Tennakoon at the premises of Dambulla Weekly Fair. The President commended the service rendered by the farmers of the area for the development of the agricultural sector.

The President was also briefed on the operations of the Rangiri Bio Green Organic Fertilizer Plant, controlled by Dambulla Urban Council. It produces 3 tons of organic fertilizer per day for Matale and Dambulla areas. Municipal councillors stated that if the government assisted in developing the waste management project of the area, the Central Province can produce the required amount of organic fertilizer.

People told the President due to contradictions between the Urban Development Authority and the Department of Archaeology and Wildlife that land disputes in Sigiriya remained unresolved for a long period of time. They also pointed out the adverse impact that could be caused on the tourism industry.

Farmers also requested President Rajapaksa to take steps to complete the construction works of the cold storage facility as soon as possible.

President Rajapaksa expressed his gratitude for constructing a hospital ward to combat COVID-19 under the guidance of Minister Janaka Bandara Tennakoon and with the financial assistance of Rs. 90 lakh from Dambulu Urumaya and several voluntary organizations.