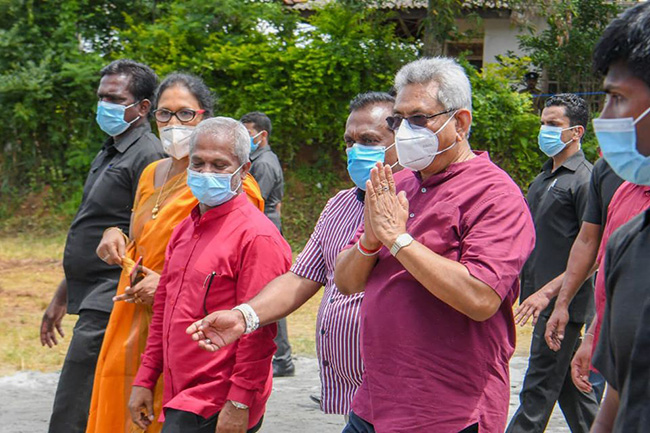 The Government will provide loans, knowhow and the technical facilities to generate self-employment, President Gotabaya Rajapaksa has assured.

He made this pledge attending a public gathering today (11) at Urban Council Ground in Kadugannawa, Yatinuwara organized in support of the candidates of Sri Lanka Podujana Peramuna (SLPP) contesting parliamentary election this August.

“Traditional industries should be preserved and developed,” the President said adding that measures will be taken to extend assistance at the provincial level to all those who make a contribution towards the national economy by engaging in self-employment.

The President, addressing a gathering at Thalathuoya, Hewahata, called on the public to give him a strong and stable Parliament. President said this in response to a request made by the people to change the electoral system as they do not have an organizer for their respective electorate. People have also requested to set up cold storage in Thalathuoya.

President then attended the public meeting organized by Wasantha Yapa Bandara in Kribathkumbura, Yatinuwara. Residents in the area have appealed to the President to develop Kiribathkumbura as a fully-fledged modern town.

President has engaged in cordial conversations with the people who attended meetings at Bogambara, Kandy and Ampitiya Public Ground in Senkadala organized by former State Minister Dilum Amunugama, the President’s Media Division (PMD) said in a release.

Attending a gathering at Galaha, Hewahata, President Rajapaksa said the best possible solutions will be given to the issues faced by the estate community while assuring that priority will be given to educational and health needs. The meeting had been organized by Berty Arulswamy.

During a meeting held in Nawalapitiya in the morning, President Rajapaksa had received blessings from the Maha Sanga of the area who chanted Pirith at Jayathilake playground, Nawalapitiya.

Eight UNP members of Pradheshiya Saba of Ganga Ihala Korale Division and 2 members from the Pasbage Korale Division, who joined hand with the SLPP recently, have met the President at this meeting, the PMD said further. They have assured the President their support him to fulfill his vision.

Estate workers gathered at the Nawalapitiya Bus Stand have requested the President to assist them in assuring a fair market price for their products.

The government has mooted several plans to protect the local farmer, President Rajapaksa stated while adding that protecting the tea industry has always been a priority.

President was also informed of the land issues faced by a number of residents in Nawalapitiya. He has advised former State Minister Mahindananda Aluthgamage to discuss this matter with the Chairman of the Land Reforms Commission and provide solutions for the affected.

President Rajapaksa also paid attention to the request to establish a Technical College and a Higher Education Institute targeting the youths in Nawalapitiya Tea estates, the PMD’s release read further.

This meeting had been organized by former State Minister Aluthgamage.

President Rajapaksa received blessings from all the local religious leaders including Maha Sangha. President received a warm welcome from the general public as well.

A group of Advanced Level (A/L) students have made a request from the President to postpone the examination to October, to which he assured that this matter will be directed to the Minister of Education. He noted this during a public gathering at Alapawila Playground, Udunuwara, Dawulagala organized by candidate Adam Fariz.