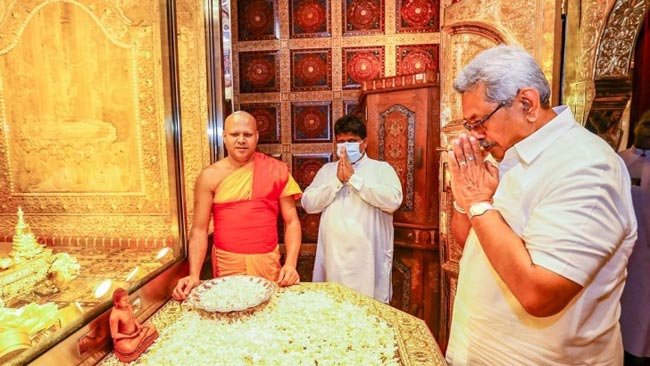 The President was welcomed by the Chief Custodian, Diyawadana Nilame, Nilanga Dela upon his arrival at the Dalada Maligawa premises, stated President’s Media Division.

President Rajapaksa called on Most Ven. Thibbatuwawe Sri Sumangala Thera, Mahanayake of the Malwatta Chapter and inquired into the well-being of the Thera.

The President also met the Anunayake of the Malwatta Chapter, Most Ven. Niyangoda Vijithasiri Thera and Most Ven. Dimbulkumbure Vimaladhamma Nayaka Thera and engaged in pleasantries.

The Maha Sangha chanted pirith to bless the President during the visit.

In addition, the President visited and received blessings from the Mahanayake of the Asgiriya Chapter, Most Ven. Warakagoda Sri Gnanarathana Thero.

Ven. Anamaduwe Dhammadassi Anunayake Thero, and the Registrar of the Asgiriya Chapter, Ven Medagama Dhammananda were also present at the occasion as well.