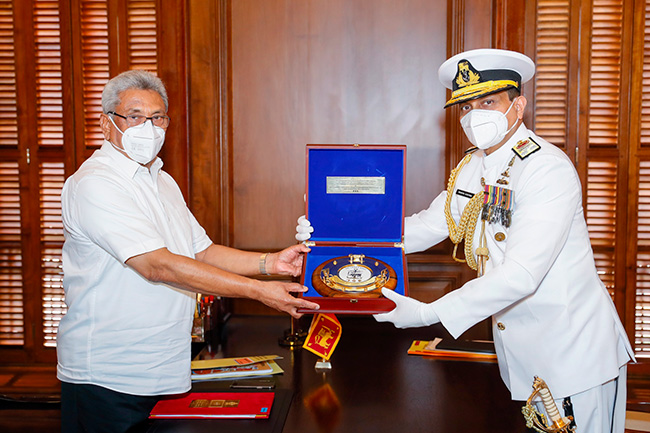 Vice Admiral Ulugetenna received his letter of appointment yesterday as the 24th Commander of the Sri Lanka Navy.

In keeping with the tradition, the new Navy Commander met with the President and presented a memento to mark the occasion.

Vice Admiral Ulugetenne enlisted in the Sri Lanka Navy in 1985, as an Officer Cadet in the 13th intake, after undergoing basic training at the Naval and Maritime Academy.

After following the Advanced Command Staff Course gaining Post Staff College (Joint), he graduated from the Joint Services Command and Staff College. He subsequently obtained a Masters of Arts in Defence Studies from the King’s College London. He has also acquired a master’s degree in Maritime Policy from the University of Wollongong and an MPhil in Defence and Strategic Studies from the University of Madras.

Vice Admiral has been serving as the Chief of Staff of the Sri Lanka Navy since May 08, 2019.