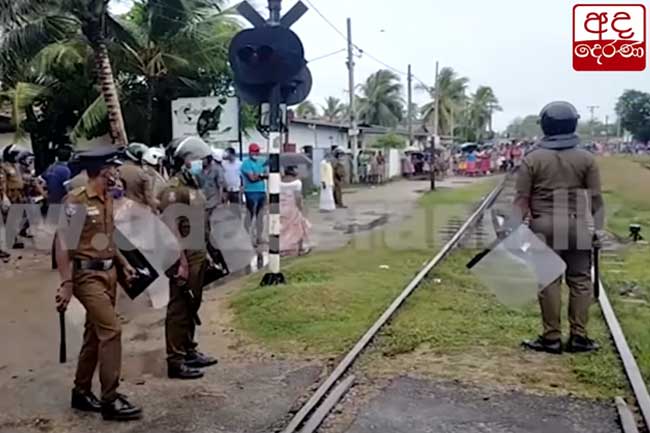 Police said that six individuals including 03 females have been arrested in connection with the tense situation in front of the Angulana Police Station.

Police Spokesman SSP Jaliya Senaratne stated that these suspects were arrested this evening for unruly behavior and damaging public property.

A tense situation had been reported in front of the Angulana Police Station earlier today as police had to resort to using teargas in order to disperse an angry mob of villagers protesting and hurling stones at the police station.

Protestors had claimed that several police officers had arrived in a vehicle and had taken away the two main witnesses of the Lunawa shooting incident at around 5 am this morning, before they were to go to court today for the hearing of the case.

In protest of this, the relatives of the shooting victim as well as a large number of villagers had gathered in front of the police station and commenced an agitation which had later spiraled out of control.

Villagers say that the two witnesses had been taken to Mount Lavinia and Moratumulla police stations before they were brought back to the Angulana police station by the officers.

Later, a number of residents in the area gathered in front of the police station at around 3pm today and engaged in a protest, which became tense as they hurled stones and other objects at the police station, causing damage to property.

The Police Special Task Force (STF) and the Riot Police were later deployed in the area to control the situation.

On July 10, a 39-year-old fisherman was shot dead by officers of the Angulana Police Station during an altercation at a roadblock in Lunawa, Moratuwa. The post-mortem revealed that the fisherman had been shot in the head.

Three police officers - a Sergeant and two Constables - involved in the shooting were interdicted following investigations.

The case filed over the killing was taken up before the Moratuwa Magistrate’s Court today while heavy police security had been observed at the court premises.

The court ordered that investigations into the incident be handed over to the Criminal Investigations Department (CID) while the case was postponed to July 30.