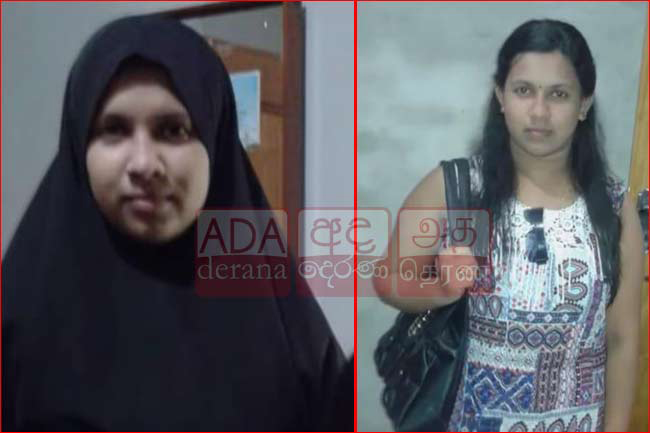 Pulasthini Mahendran not among the dead in Sainthamaruthu attack, PCoI told

The Presidential Commission of Inquiry (PCoI) on Easter Sunday terror attacks heard that there are doubts as to whether Pulasthini Mahendran alias ‘Sara Jasmine’, a converted Islamic extremist and part of Zahran Hashim’s terror group, was among the 16 dead at the Sainthamaruthu safe house raided on the 26th of April last year.

SSP Samantha Wijeseskara, who was in charge of Ampara Police during the Easter Sunday terror attacks last year, told the PCoI on Tuesday (21) that according to new information, none of the DNA samples from the 16 bodies matched the sample from Pulasthini’s mother.

He recalled that on the 26th of April 2019, while searching a safe house in Ninthavur, he had received reports of shots fired at traffic policeman in Sainthamaruthu from a house in the area.

The panel questioned the witness of the warning that were received regarding the suspicious individuals at the location. He responded that 02 female residents at the Voliverian Housing Scheme had on suspicion visited the house along with a mosque representative to question the residents.

At the location, the group was approached by an armed male suspect who stated they are preparing to sacrifice our lives for them.

The trio had then left the premises and informed an on-duty traffic police officer of the matter.

After receiving reports on shots being fired at the police officer, the witness, along with his team, had gathered at the metal bridge near the entrance to the Voliverian Housing Scheme.

The witness revealed that they saw a tracer bullet fired into the air from the house, followed by a loud explosion, which led to a 40-minute gun fight between the suspects and security forces. This was followed by another explosion.

The PCoI was told that the witness’s police team discovered Rs. 980,000 in 5,000 notes lying on the wayside near the house.

He added that while searching the house, they had discovered Central Bank receipts for the issuance of a thousand Rs. 5,000 notes.

The witness went on to say that the 16 bodies recovered from the house, including 05 males. 05 females, 03 male minors and 02 female minors.

The Additional Solicitor General then showed the witness the photographs of the bodies and asked him to confirm the identities.

He stated that the first suspect shown in the photograph was identified by them as Mohamed Niyaz, who had helped Zahran’s group store material in Ninthavur and Sendalgam.

The witness was then showed the video uploaded to the internet by the individuals who were inside the house prior to the confrontation and asked him to confirm the deaths of the individuals seen in the video.

He revealed that they were able to identify the remains of Zahran Hashim’s father as well as Zahran’s brother Zaini, who was seen in the video holding a child.

He added that they also identified the remains of another brother of Zahran named Mohamed Cassim Mohamed Rilwan, which were recovered on the roof possibly killed while attempting to either escape via or launch an attack from the roof.

Among those who were dead inside the house were Zahran’s eldest son Mohamed Zahran Wasim, Zahran’s pregnant sister Mohamed Cassim Hidiya and his mother Abdul Sakar Siththi Umma.

The witness stated that upon entering they also discovered a heavily injured female child and an adult identified later as Zahran’s daughter Mohamed Zahran Rudeina and her mother Abdul Cader Fathima Hadiya.

The PCoI was also told that a wallet belonging to Pulasthini Mahendran alias ‘Sara Jasmine’ was also found in another room of the house.

When the witness was asked if Pulasthini was identified among the dead, he responded that interrogation of a suspect named Siyam confirmed that this woman had been among the group before the raid on the 26th of April, which was corroborated by Zahran Hashim’s spouse.

The witness added that recent information received through intelligence sources revealed that no DNA samples from any of the remains matched the DNA from Pulasthini’s mother.

He said the investigations were then hampered by his sudden transfer on the 24th of July 2019.

He revealed that his replacement, a diligent police officer named Marapana was also transferred after only 06 months, leading him to conclude that the transfers were undoubtedly politically motivated.

There were ample reasons to believe this, as certain information uncovered during the investigations were deemed politically damaging to certain groups at the time, he continued.

Meanwhile, the PCoI heard new evidence regarding the whereabouts of Sara Jasmine from Chief Inspector Arjuna Mahilkanda, an investigating officer at the PCoI investigation unit who revealed information about an eyewitness who had seen the woman in question in September last year.

New evidence that come to light from the said eyewitness claimed that the suspect was seen at around 3.15 am entering the Beach Road from Batticaloa-Kalmunai main road in the company of two males, last September.

The eyewitness has said that Sara Jasmine had then entered a beige coloured pickup truck along with the duo.

The person occupying the driver’s seat was an individual known to the eyewitness, CIP Mahilkanda revealed.

The eyewitness has further stated that the individual in question had been the OIC of the Kalavanchikudy Traffic Police named Abubakar. He had later been attached to the Colombo Crimes Division (CCD), however, he is reportedly now in custody over having links to the attacks.

When the eyewitness had approached the vehicle to speak to him, the pickup had sped away towards Batticaloa.

CIP Mahilkanda said he had received information of 02 individuals who had assisted Sara Jasmine to flee to India by boat.

Investigations later revealed that it was the husband of her mother’s sister and his brother who has assisted her escape.