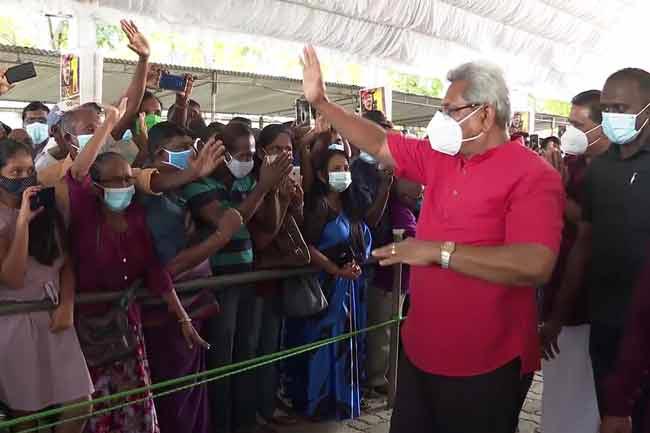 Corruption and malpractices in public sector will be eliminated - President

President Gotabaya Rajapaksa assures that all the corruption, malpractices and irregularities in the government will be eliminated and establish an efficient public service in the country.

President Rajapaksa emphasized that bribery, corruption and irregularities in the government sector will cease to exist and a government dedicated to serve the citizens in a satisfactory manner would be established.

President made these remarks during the election tour in Kalutara today (July 29) in support of the candidates representing Sri Lanka Podujana Peramuna (SLPP) at the forthcoming general election.

“The government has initiated to build an economic system to end the import-based trade system in the country and to give priority to local productions. President advised the crowd to enter themselves into the agricultural and manufacturing industries in order to reap the full benefits offered in these sectors.

It is time to incorporate modern technology to strengthen the farming economy. For this purpose, the government has banned the importation of agri produce into the country. Job appointments for 150,000 underprivileged individuals and graduates will be given following the general election. These measures and opportunities will aid the country in its development curve.”

President Rajapaksa participated in a public rally at Panadura Municipal Grounds organized by the SLPP candidate Jagath Angage and exchanged pleasantries with the crowd present and inquired into further facilities they require in the district.

“We would resolve the shortage of drinking water in the area”, President promised the locals during a public rally in Korosduwa Playground, Panadura organized by the former state minister Jayantha Samaraweera.

During his tour, students due to sit for A/L examination in 2021 urged the President to pay his attention to the difficulties they had faced as the studies were disrupted on account of the COVID 19 pandemic this year and the Easter Sunday attacks last year.

President Rajapaksa took note of the requirement to renovate the Kalutara Nursing School. In response to another request for renovation of buildings of the Panadura Central College, President instructed former state minister Jayantha Samaraweera to attend the matter.