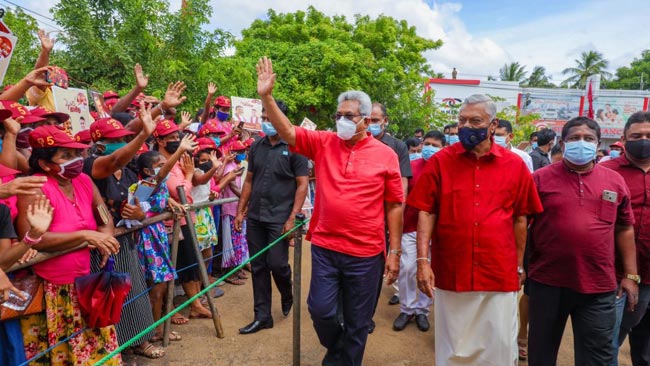 President Gotabaya Rajapaksa says that the Hambantota district will be developed as one of ‘Four Multi-dimensional Commercial Cities’ that was expected to be function as International Coordination Centres.

Colombo, Jaffna, and Trincomalee are the other districts expected to be developed as ‘Four Multi-dimensional Commercial Cities’, stated President’s Media Division.

The President said that the government will build a country that can compete in international markets by establishing a “C-shaped economic corridor‟ connecting two main ports and airports while integrating all business zones.

President Rajapaksa made these remarks during his campaign visit to the Hambantota district, today (02) in support of the candidates of Sri Lanka Podujana Peramuna contesting the next Wednesday’s Parliamentary Election.

President Gotabaya Rajapaksa further said that he will build a people-centric economy that will be fully owned by the people of this country.

He said that the objective of the government is to create a ‘national economy’ for the future that will strengthen the local entrepreneurs instead of vending national resources and financial assets of the country to foreigners.

President Rajapaksa emphasized that it was important to comprehend the bitter reality of the economy following the COVID-19 pandemic and strengthening the people instead of fabricating false promises about the cost of living.