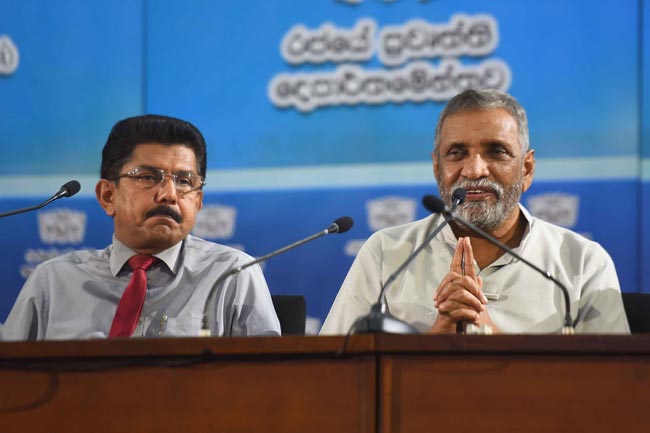 Election Commission Chairman Mahinda Deshapriya says that it is 100 percent guaranteed that COVID-19 will not be spread through polling stations.

Speaking at the press conference held at the Department of Government Information today (03), Deshapriya said that all voters must wear a mask to the polling station and that they will be made to wash their hands at two points of the polling process.

Further, the voters are allowed to bring their own blue or black pen to cast the vote. If not, they will be provided a disinfected pen, he added.

The Chairman said that the COVID-19 pandemic will not spread due to the election if the directives of the Director General of Health Services are followed.

Meanwhile, joining the press conference, Director General of Health Services Dr. Anil Jasinghe stated that people in quarantine centers will not be allowed to vote at the general election.

However, persons who have successfully completed the 14-day quarantine period may vote under special circumstances, he said.

They are to arrive at the polling station after 4 pm on the Election Day and an extra polling booth will be allocated for them, Jasinghe added.

Those who have recovered from COVID-19 infection and successfully completed the mandatory 14-day quarantine are also allowed to vote in this manner, he said.

The Election Commission said that health service officials have been deployed to cover all polling stations in the country.

Only 50 percent of the 800 who will be in quarantine centers on the Election Day are eligible to cast their vote, said the Commission.

Meanwhile, between 1,700 and 1,800 persons have successfully concluded the 14-day quarantine.