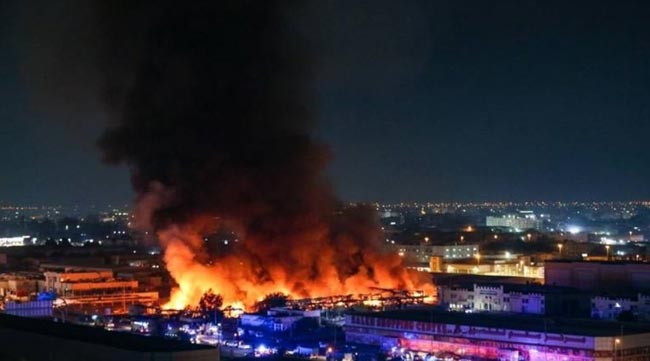 UAE: Massive fire breaks out at market in Ajman

A massive fire broke out at a fruits and vegetable market in Ajman, United Arab Emirates (UAE) on Wednesday around 6.30pm local time with thick black smoke visible from different areas of the emirates.

The Ajmal Civil Defence received calls of a massive fire that broke out at a market in Ajman and immediately dispatched firefighters to the scenes.

There are currently no reports whether someone was hurt as a result of the Ajman market fire and firefighters are still on the scene trying to tackle the blaze that sent plumes of thick black smoke billowing into the sky.

A hospital in the near vicinity of the fire was evacuated as a precautionary measure due to the close proximity.

Many people from surrounding areas reported how the flames quickly engulfed the entire area.