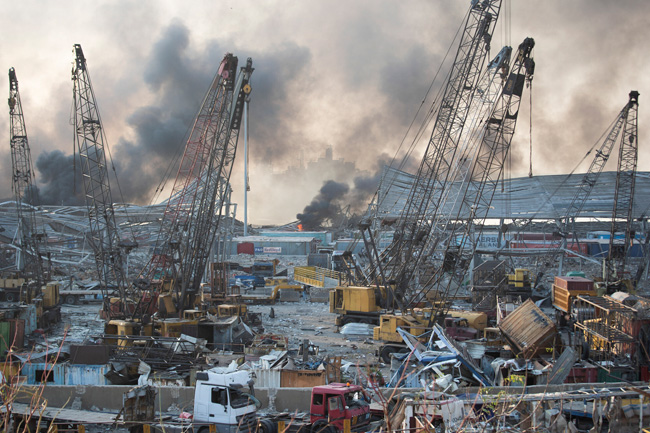 Six more Sri Lankan nationals are reportedly injured in the massive explosion that rocked the Lebanese capital, Beirut city, on Tuesday (04), the Embassy of Sri Lanka in Beirut has stated.

Eight Sri Lankans have so far sustained injuries in the catastrophic blast which killed nearly 135 people and injured more than 5,000.

The Sri Lankan Embassy, in a statement, said the injured are receiving treatment at hospitals at present.

In the meantime, it is reported that minor damages were caused to the Sri Lankan Embassy building in Beirut and the residences of its diplomatic mission. However, the embassy officials have not been injured in the explosion.

Approximately 25,000 Sri Lankans are employed in this Western Asian country bordered by Syria and Israel.

Family members and relatives of Sri Lankan expatriates in Lebanon, who wish to receive information with regard to the situation, can contact the Embassy’s office in Beirut via +961 5769585 or its official e-mail address (slemb.beirut@mfa.gov.lk).

According to foreign media, the blast had struck with the force of a 3.5 magnitude earthquake.

Lebanese authorities launched investigations to determine the exact cause of the explosion, however, the Lebanese officials have begun to look into 2,750 tonnes of confiscated ammonium nitrate that was kept stored in a warehouse near the port where the incident happened, for six years.

According to reports, more than 200,000 people have become homeless.

President of Lebanon, Michel Aoun has declared a three-day mourning period and stated that the government would release 100 billion lira (£50.5m; $66m) of emergency funds.