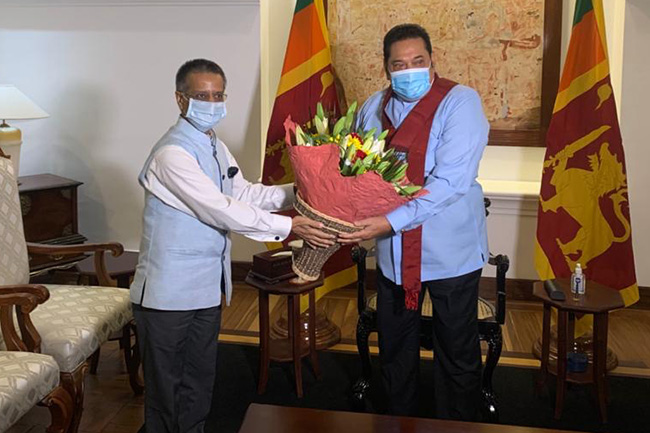 India has extended an invitation to Sri Lanka to send the first international flight to its newly-upgraded Kushinagar Airport.

He called on PM Rajapaksa at the Temple Trees this afternoon (08), to relay his best wishes for the landslide victory at the recently-concluded parliamentary election, the Prime Minister’s Media Division said in a statement.

In June this year, the Indian government reached a decision to declare the Kushinagar Airport in Uttar Pradesh an international airport. This is particularly significant to Sri Lanka’s Buddhist pilgrims since the airport is located close to a number of sites sacred to Buddhists.

High Commissioner Baglay further said that PM Modi is keen on promoting Buddhism and has placed a “specific focus” on initiating related projects, not only in the area of tourism but also other sectors as archaeology.

PM Rajapaksa has meanwhile expressed his condolences to all those affected by the Air India crash that has so far killed 18 people, the statement continued. Earlier in the day, the Premier expressed his condolences on Twitter: “I’m shocked & saddened to hear about the tragic plane crash at Kozhikode, Kerala. On behalf of the Gov. & People of #SriLanka, I express my deepest condolences to bereaved families & wish the injured a speedy recovery. Our prayers are w/the people of India at this hour of grief.”

In addition to ongoing projects, High Commissioner Baglay said that India would also be happy to assist Sri Lanka on areas such as water and sanitation. PM Rajapaksa has said irrigation is another important area on which the two countries can collaborate.

The Premier has also said that he was delighted to receive his Indian counterpart’s call yesterday, even before the final results were declared.

“It was clear as the sunrise,” the High Commissioner has said in response. “With your blessings, we look forward to moving forward”.