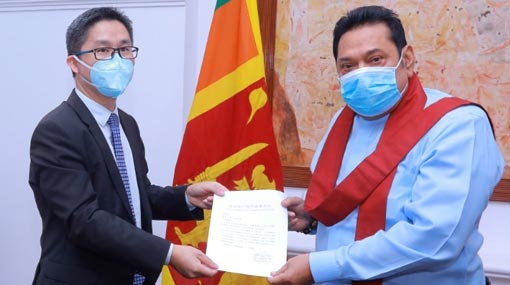 Chargé d’affaires of the Chinese Embassy in Sri Lanka Hu Wei, yesterday (08) called on Mahinda Rajapaksa, Leader of the Sri Lanka Podujana Peramuna (SLPP) on the eve of the latter’s re-assumption of premiership and the formation of new government.

The Chinese envoy handed over a letter from the Central Committee of the Communist Party of China to the Sri Lanka Podujana Peramuna, warmly congratulating SLPP’s landslide victory in the latest General Election, highly appreciating the friendship and exchanges between the two parties, and strongly expressing its willingness to deepen the mutual cooperation in the coming years.

Prime Minister Mahinda Rajapaksa extended his most sincere thanks to President Xi Jinping and the Communist Party of China for the congratulations and the long-term solidarity, highly praised the time-tested friendship between the two countries , and reiterated the commitment to promote the bilateral relations to a new height with joint efforts.