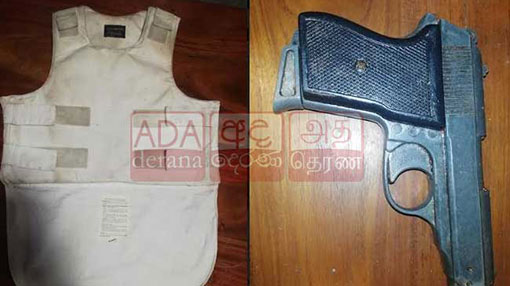 A person has been arrested at Wathura in Kegalle for the illegal possession of a firearm, stated Police Media Division.

The arrest has been made last night (08) based on a tip-off received by the intelligence units of the police Special Task Force (STF).

Accordingly, officers have found an 8 mm pistol on the suspect during the arrest.

Preliminary investigations have revealed that the suspect had been involved in several organized crimes.

Upon interrogation of the suspect, intelligence unit of the STF carried out a search at a hotel in Ranwala, where a foreign-manufactured bulletproof vest has been found.

Reportedly, the vest had been identified to be a ballistic-type bulletproof vest used by armed forces.

Further, the owner of the hotel has also been arrested.

Both suspects are scheduled to be produced before the Kegalle Magistrate.