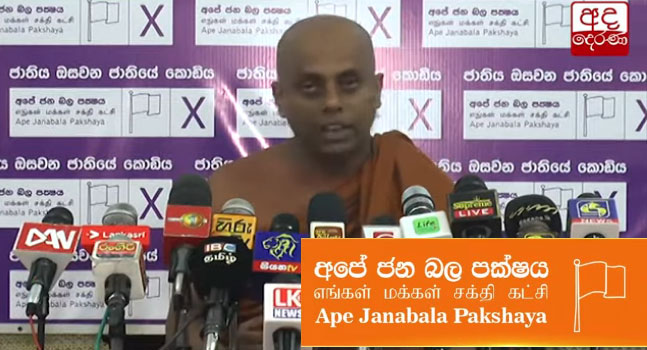 A problematic situation has arisen with regard to the single National List obtained by the ‘Our Power of People Party’ (Ape Janabala Pakshaya/OPPP) at the recently concluded parliamentary election.

This is due to the General Secretary of the party Ven. Wedinigama Wimalatissa Thero submitting a letter to the Election Commission claiming that he has been nominated to enter parliament as the party’s National List MP.

However, a group including the Chairman of the ‘Our Power of People Party (OPPP)’ have notified the commission that the said letter is not valid while the central committee of the party yesterday decided to nominate party member Ven. Galagoda Aththe Gnanasara Thero for the National List MP seat.

However, the General Secretary of the party Ven. Wedinigama Wimalatissa Thero, who is responsible for officially informing the Election Commission that Ven. Gnanasara Thero has been chosen for the MP seat, has now disappeared, according to OPPP candidate Ven. Pahiyangala Ananda Sagara Thero.

Speaking to reporters today (Aug. 10), the Thero said that as per the election laws it is the General Secretary of the party who has to name an individual for the MP seat and submit it to the Election Commission.

“But, the problem we have is that the secretary has currently disappeared,” he said.