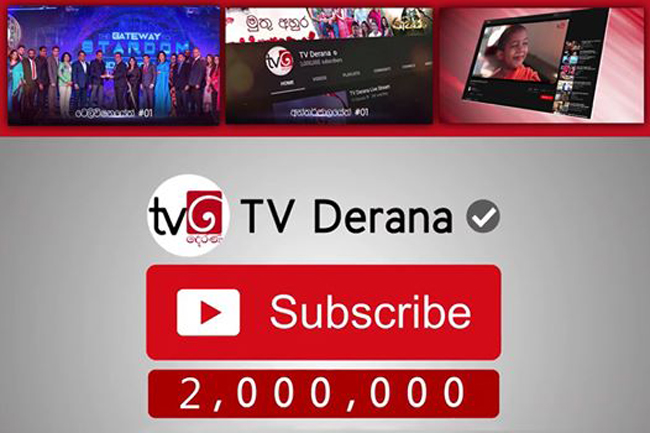 Sri Lanka’s premium entertainment channel TV Derana has topped 2 million subscribers, becoming the first Sri Lankan channel to surpass the milestone and anchoring its position as the most trusted and entertainment portal of choice in the country.

TV Derana YouTube Channel, created on the 26th of January, 2012, has seen a progressive growth of its subscriber base during this eight-year period.

More than 16,550 videos have been uploaded on TV Derana’s YouTube channel to date, generating over 1,647 million views in total.

The content uploaded on Derana’s YouTube channel varies from teledramas, reality shows, musical and educational programmes among a host of others.

Teledramas aired on TV Derana such as “Sidu,” “Deveni Inima,” “Sangeethe” and “Ravana Season 02” are among the most-watched programmes on television as well as online in the country.

Derana is a premium entertainment and news channel offering multichannel access including television, radio, and online services. A pioneer in digital content and online entertainment in the country, Derana aims to transform and revolutionise Sri Lanka’s television industry while taking it to new heights.

Derana is synonymous with cutting edge innovative and fresh entertainment content and has been recognised for delivering the most ethical and unbiased news and current affairs content.